Flowing into the Chanel show on Tuesday night, guests oohed and aahed over the Place Vendôme set lit up in the dark Grand Palais. 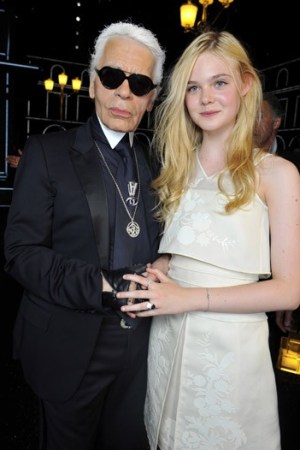 COCO BEFORE BEDTIME: Talk about night fever. Flowing into the Chanel show on Tuesday night, guests oohed and aahed over the Place Vendôme set lit up in the dark Grand Palais. Milla Jovovich confessed she had been planning to bring her three-year-old, Ever, until she realized that the show started at 10 p.m. and not 10 a.m., as she had first understood. “She even got an invitation with her name on it — Mademoiselle Anderson. Her first invitation to a Chanel show and she had to turn it down,” she said.

Elle Fanning, meanwhile, was having a night of firsts. “This is my first-ever fashion show and it’s the first time I’ve been to Paris, so I think this night will be pretty special,” the 13-year-old actress said.

SWEATER WEATHER: Donning a cashmere sweater in 95-degree heat, Claudia Schiffer proved how dedicated she is to her new knitwear collection, which made its retail debut at hip Paris store Colette. “It’s the only one that has short sleeves,” the German supermodel said Tuesday as she greeted guests including Daphne Guinness, Milla Jovovich, Carine Roitfeld and Olympia Le-Tan.

The collection, designed with German cashmere specialist Iris von Arnim, will launch in 50 doors worldwide, with exclusives for around 15 retailers including Harvey Nichols in London, The Corner in Berlin and Net-a-porter in the U.S., according to managing director Valentin von Arnim.

Schiffer said she has been surprised to find out how early stores want their winter wares delivered. “I can’t buy when it’s hot,” she confessed.

On the other side of the floor, Belgian model Anouck Lepère pitched in as sales associate for the launch of her jewelry collaboration with Gaia Repossi to raise funds for the Kageno nonprofit organization in support of children in Rwanda. Her first customer was Thierry Gillier, founder of French luxury lifestyle brand Zadig & Voltaire. “I guess I did a good job because he bought one,” Lepère laughed. “I worked in an organic restaurant when I was student. Back then I was a waitress, but I was selling food.” Later, Schiffer came to check out her stuff with photographer Mario Testino.

MOSS AND GREEN, TOGETHER AGAIN?: The latest wedding rumor to hit the British tabloids is that newlyweds Kate Moss and Jamie Hince are honeymooning on one of Sir Philip Green’s yachts. The Sun reported this week that Moss and Hince are holidaying on the 109-foot “Lionchase,” which is technically Green’s son Brandon’s yacht, for the next two weeks. Green’s own yacht is the 208-foot Benetti “Lionheart.” Spokesmen for Green and Moss declined to comment. The report follows rumors earlier this week that globe-trotters Moss and Hince were headed to Timbuktu for some trekking, and would also be visiting Algeria, the Sahara, Thailand and the Caribbean over the next few months.