Spotted recently front row at Chanel’s spring couture show, Vanessa Paradis, it seems, was getting inspiration for her stage wardrobe. 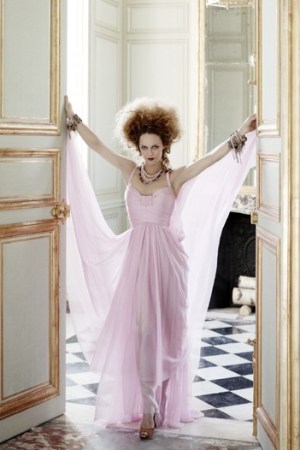 COCO NUT: Spotted recently front row at Chanel’s spring couture show, Vanessa Paradis, it seems, was getting inspiration for her stage wardrobe. When the songstress hits the stage on Wednesday at New York’s The Town Hall venue, it will be in a Chanel dress specially made for her by Karl Lagerfeld. Paradis will present an acoustic set she performed last year at the Casino de Paris and the Opéra Royal de Versailles venues in France. As longtime collaborators, Lagerfeld shot several pictures of Paradis in Versailles, which were included in a collector DVD released by the singer at the end of last year.

HOUSE PROUD: Karl Lagerfeld — who last week told WWD he would sell his Manhattan apartment on Gramercy Park because he almost never stays there — has decided to take it off the market. The designer is incensed at the erroneous suggestion — floated on countless blogs and Web sites in recent days — that he was prepared to let the luxury flat go at a steep discount to what he paid for it in 2005. “I never heard anything about such a price, nor has my business manager,” the designer said Monday. Squelching the speculation, the savvy designer has decided not to pursue a listing. “We live in a time beyond truth,” he stated. “Today, you can put anything on the ’Net and you don’t even have to excuse yourself when it’s not true.” Meanwhile, Lagerfeld continues to invest in another prime piece of real estate in America. He is completely restoring his house in rural Vermont, a 1840 beauty in a Greek Revival style, to its original glory.

LANCOME’S NEXT MUSE?: Could Emma Watson be the next name to be added to Lancôme’s roster of starry ambassadors? British newspaper the Mail on Sunday ran a story over the weekend saying that Watson is about to sign “a six-figure deal to become the latest ambassador for Lancôme.” The paper quoted Watson as saying she “can’t wait to start shooting,” for the cosmetics brand, and reported that Mario Testino will lens Watson’s campaign. A spokeswoman for Lancôme declined to comment Monday. However, the brand is no stranger to famous faces — Julia Roberts, Kate Winslet and Penélope Cruz are among those who have been featured in the house’s recent campaigns.

GONE EXPLORING: Chloë Sevigny, Olivier Zahm, Martine and Prosper Assouline and Paul James of the Luxury Collection Hotels & Resort are hosting a dinner tonight for Waris Ahluwalia, who is the newest global explorer for the resort group. The dinner, which follows his presentation at the Museum of Arts and Design, is expected to draw Terence Koh, Darren Aronofsky, Lily Donaldson and Peter Marino to event space Alger House.

METAL WITH MERITS: Stephen Webster and Garrard are throwing their weight behind fair trade and fair mined gold. Webster, who has his own label and who is the creative director of Garrard, plans to offer engagement and wedding rings in London using fair trade and fair mined gold, with an eye to using this gold exclusively. “Once we get started, we intend to grow quickly the volume of business we conduct using fair trade gold. One day I want it to become 100 percent of the gold we sell,” Webster said Monday. He said the fair trade gold costs 10 percent more than standard gold, but his companies would be absorbing the premium. “We don’t want price to be the reason not to choose a more responsible product,” he said. The pieces will be hallmarked with “Fairtrade” and “Fairmined” logos. Under the fair trade system, mining companies have to guarantee their methods of production are safe for people and for the environment. In addition, they have to make a commitment to improving working conditions both for miners and for the communities involved with the mines.

JAVIER’S NIGHT: There was no Pedro (Almodóvar) or Pe (Cruz) and not a royal in sight. Sunday night’s Goyas, Spain’s equivalent of the Oscars, was short on star power — with one exception. Javier Bardem dropped in long enough to pick up his fifth Goya for Best Actor in Alejandro González Iñárritu’s Mexico-Spain co-production “Biutiful.” Dressed in black — suit, shirt and tie too — Bardem dedicated the award to “my wife and son [who remains officially without a name, according to Cruz’s agent here]. They wake up my heart every day.” Both were home in Los Angeles. The ceremony was held for the first time in Madrid’s Teatro Real, with a gold gilt interior that dates back to 1850. On the red carpet were lots of strapless gowns, draped and wrapped effects, and black. Two of the best dresses: Elena Anaya — star of Almodóvar’s “The Skin that I Inhabit,” due for a fall release — wearing a deep bottle-green gauzy number by Elie Saab, and veteran actress Emma Suárez’s burgundy Empire-styled Gucci.

HIT THE BRAKES: Agent Provocateur literally stopped traffic with a Sunday night party at their Madison Avenue boutique. Taxis slowed to a crawl as they drove past, all the better for drivers to ogle the several lingerie-clad dancers shaking their moneymakers in the store’s windows. “We had a group of policemen watching outside and pounding their fists against the glass!” Sarah Shotton, the creative director of the brand said with a laugh. The party marked the brand’s recent collaboration with Joséphine de la Baume, who Shotton described as “sexy and intelligent.…she’s even a little bit naughty! Perfect for us.” Dancers in lingerie, pasties and cowboy hats “shot” partygoers with bananas or twirled on poles near guests who included Fern Mallis, Andrew Andrew, Cory Kennedy and Mark “The Cobrasnake” Hunter. “There’s something really rock ’n’ roll about Agent Provocateur,” said a grinning de la Baume. “Also, in the video we shot they use my music! So yeah, rock ’n’ roll. Perfect.”