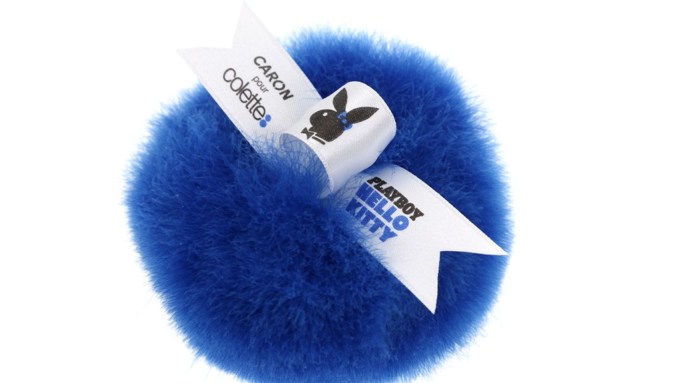 PARIS — Colette is celebrating the 40th birthday of Hello Kitty and the 60th anniversary of Playboy with a series of products produced in collaboration with both brands.

The Paris concept store is staging a party at the Crazy Horse cabaret on Friday night to fete the joint project, and will put the products on sale on March 1. Incorporating touches of Colette’s signature shade of blue, some feature Hello Kitty with bunny eras, while others show a Playboy bunny with a bow tie at its neck.

The collectors’ items include an embroidered bow tie from Charvet; a blue cygnet down powder puff from Caron; a pair of Happy Socks; a Leica C digital camera; a Bic lighter and four-color pen; and and Haribo mouse marshmallows.

Sarah Andelman, creative director and purchasing manager of Colette, said she had been in contact with Sanrio about the launch of “Hello Kitty Collaborations,” due to be published by Rizzoli on April 1, and with Playboy regarding its recent 60th anniversary issue and some special collaborations.

“I had a dream with the vision: Let’s combine them!” she said.

Colette averages about one to three collaborations a month, in addition to special projects with artists like Kevin Lyons and items produced for its pop-up locations, such as the Art Drive-Thru staged during Art Basel Miami Beach in December.

“I still think they can be effective and bring out some unique products,” said Andelman. “We like to balance very exclusive products like the Leica camera (only 10) and some funny goodies like the Haribo marshmallow.”

Colette has turned over one of its windows to Hello Kitty and is selling a series of anniversary items. Hello Kitty designer Yuko Yamaguchi was at the store Wednesday to sign copies of the Rizzoli tome as a Hello Kitty mascot dispensed hugs.