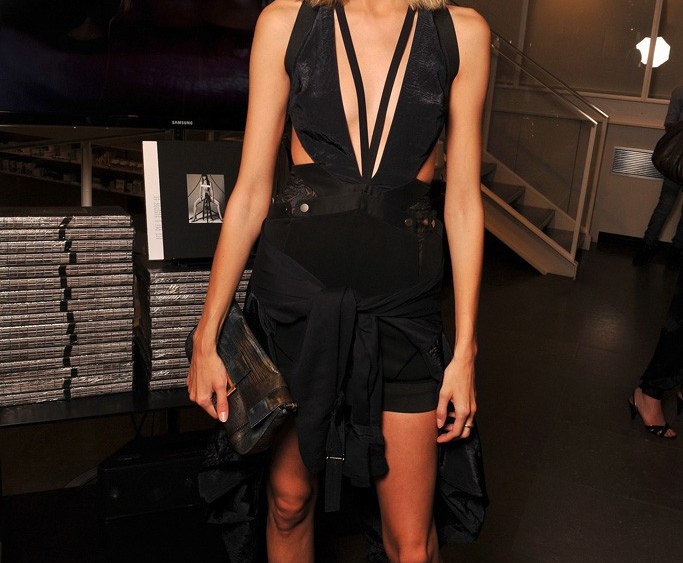 BIG HEAT: Temperatures soared at Colette on Tuesday night as guests including Anja Rubik, Jean-Charles de Castelbajac and Lou Lesage crammed into the store for the opening of Fendi’s Baguette Mania pop-up shop, as well as the arrival of the Catherine Baba for Gripoix jewelry line.

“The problem is you can never decide which one to buy as there is such a big variety,” sighed Russian TV presenter and journalist Evelina Khromchenko of the ornate bag range. Surveying the crowd, Karl Lagerfeld coolly sipped on a Diet Coke.

Lesage, who is a model and singer, said she is due to start filming a movie called “Ocean,” based on “rock and surf.”

Meanwhile, Castelbajac was in a jubilant mood having been invited to stage the music show he directed, “Dawn of Innocence,” starring Nouvelle Vague, at the next editions of Art Basel in Basel and Miami.  In September, the designer will stage a fashion show and art exhibition at the Triumph Gallery in Moscow.

Castelbajac’s son Louis-Marie is multitasking, too. He’s gearing for the fall launch of a new brand of Armagnac, called 700, “for the 700 years of Armagnac,” which has been in the works for two years. Among other projects, he’s art directing a new line at his father’s company and continuing work on his T-shirt collection.

Didier Ludot, for his part, will host a vernissage in Palais Royal on Thursday evening to kick off an exhibition of Princess Chantal de France’s paintings, which runs through July 21. Then, during Paris ready-to-wear season in September, he will mount a tribute to Claude Montana.

“We will have an exhibition in different boutiques of the Palais Royal,” said Ludot, adding Montana will attend the opening. “I think he is one of the great designers of the Eighties and that we haven’t paid him enough homage.”