The film about the last six months of the Paris concept store Colette will be available on demand from Dec. 20.

END OF AN ERA: One year to the day after its premiere in Paris, “Colette Mon Amour,” the documentary retracing the last six months of the celebrated Paris concept store Colette, is finally hitting screens with an online release on Dec. 20.

The date has special significance: it was also the last day of trading in 2017 for the Rue Saint-Honoré boutique, known for its cutting-edge fashion selection and one-of-a-kind events and exhibitions.

To mark the worldwide release of the film, after a series of exclusive screenings and pop-ups in London, New York, Paris and Tokyo, there will be a final drop of limited-edition products, including collaborations with Thom Browne, Saint Laurent, Lego and Mattel, available on Dec. 14 on the e-commerce site of Highsnobiety, which co-produced the documentary.

“This marks the end of a beautiful story,” Sarah Andelman, the former head buyer and creative director for the store, told WWD. “I’ve been looking forward to it, especially since we were regularly receiving messages from people asking when they could see the film.”

The movie, directed by Hugues Lawson-Body and featuring interviews with the likes of Kanye West, Pharrell Williams, Virgil Abloh and Kaws, will be available on demand on colettemonamour.com. In addition to a French or English voiceover, it comes with subtitles in Chinese, Japanese and Russian, Andelman said. 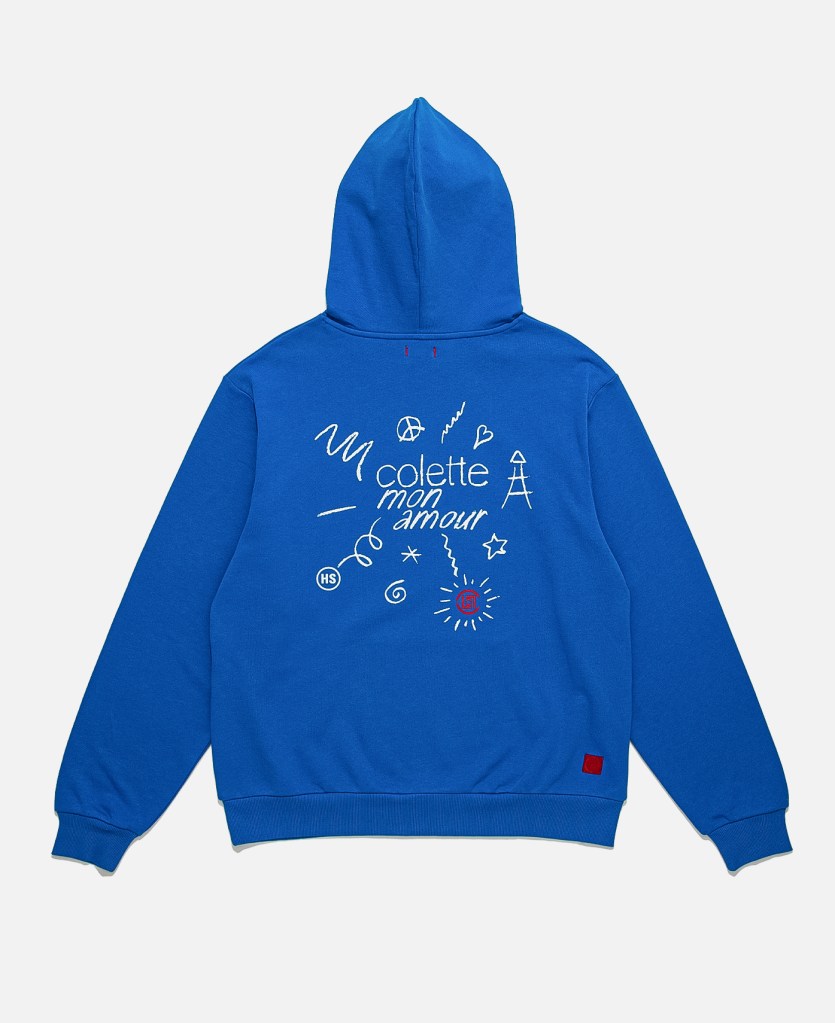 A limited-edition sweatshirt by Clot to mark the release of “Colette Mon Amour.”  Courtesy image

Prior to the global release, the documentary will be previewed one last time as part of Innersect, the Shanghai convention founded by Edison Chen, scheduled to take place from Dec. 4 to 6. For the occasion, a pop-up will offer a pre-selection of the final online product drop, including T-shirts and hoodies designed by Clot, the brand cofounded by Chen.

For the last round of collaborations, Browne has created embroidered versions of his signature suits, although the other items are mainly on the accessible end: think an Officine Universelle Buly soap embossed with a rendering of the Colette facade, an L/Uniform pencil case or a Rubik’s Cube produced in collaboration with Saint Laurent, which subsequently took over the store’s location.

“I thought it would be nice to have a souvenir, some small objects for the home just for fun,” said Andelman, who now heads her own creative agency, Just an Idea.

The decision by Andelman and her mother, Colette Roussaux, to shut the beloved store seems prescient in light of subsequent events: violent anti-government protests in the run-up to the holiday season in 2018: a 50-day transport strike that disrupted trading in December 2019; and two lockdowns this year designed to limit the spread of COVID-19.

“I have no regrets. It’s really a huge relief,” said Andelman. “It must be very tough for retailers. Even if some of the lost revenues are compensated by online sales, it’s hard on the staff. It would have been a nightmare to have to deal with this situation. It’s surreal to see all the stores closed.”

Fortunately, her consultancy work has not been affected by the coronavirus pandemic. Andelman is even planning to expand into publishing, with a series of limited-edition artist books — though details remain under wraps until next year.

Au Revoir, Colette: A Look Back at a Retail Pioneer