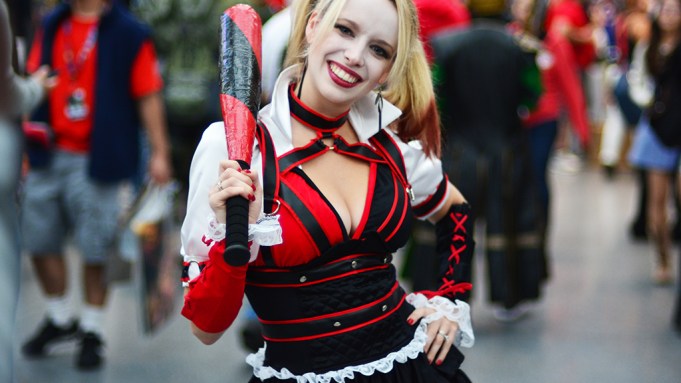 Whether it’s the capes, cowls or copious amounts of spandex, comic books are not usually thought of for their style sensibility. But drawing people means drawing clothes and a new wave of artists have looked to fashion for realism as well as added layers of personality for their characters.

“Clothes and fashion come down to identity,” said artist Cameron Stewart at a panel on fashion in comics held this past weekend at New York Comic Con. The panel also included fashion-forward comic artists Robbi Rodriguez, Jen Bartel and Adam Withers. Stewart spoke mostly about his work on DC Comics’ “Batgirl,” for whom he used a redesigned costume to spearhead a tonal shift for the series. “The character had been mired in trauma,” Stewart said. “I just wanted to get past that, and have her be someone who is hopeful.”

Withers, who along with his wife Comfort Love produces a self-published series called “Rainbow in the Dark,” stressed not only how the clothes express the character, but how the character determines the clothes. “The way we dress ourselves is a costume we put on every morning, we’re trying to get the world to see us the way we want to be seen,” he said. “With superheroes it’s the same idea just taken up to another level, because they’re not just trying to be seen as a certain type of person, but as a certain type of icon.”

The teenage characters of “Rainbow in the Dark” are influenced by a different musical genre — a punk in leather and studs, a New Waver with a keytar, a Hendrix-esque “gypsy pirate.”

Jen Bartel takes a lot of influence from K-Pop and other stage costumes, like Beyoncé’s, for her “Jem and the Holograms” cover art. “I’m also a big fan of Lisa Frank,” she said, laughing.

But even superheroes need normal clothes, and an eye for streetwear is as important for the artists as their ability to properly style a utility belt. “There are a lot of artists working in comics that don’t actively look at fashion,” she said, noting that she keeps a vast collection of fashion reference images that she shares with some of her colleagues. The difference, she said of this new wave of artists, is an authentic interest in fashion.

“The other thing that’s funny — funny-slash-depressing — is male artists drawing women’s fashion the way that they want to see it,” Stewart added, to a chorus of laughter and applause from the room. “I saw something, within the last two years, where there was a drawing of the girl wearing low jeans with the thong strap. It’s important for men in particular to pay attention; it’s not about you.”

With the rise of cosplay, character designs stand a larger chance than ever of seeing real-world manifestations. Rodriguez saw this firsthand when cosplayers started turning out as Spider-Gwen at conventions only a month after the character made its debut. “It was something cool and fun I wanted to draw, and I’m superhumble and glad it struck a chord with them,” he said. “Evidently, I was onto something, I didn’t know what at the time.”

It started as a one-off issue that imagined what it would have been like if Gwen Stacy had been bitten by the radioactive spider instead of Peter Parker, and was probably intended to end there. But fans loved Gwen and her sleek, neon-noir look — which Rodriguez jokes was mostly rooted in the fact that he didn’t want to keep drawing webbing over and over.

Predictably, licensed Spider-Gwen merchandise wasn’t far behind, either. Within just two years, Spider-Gwen costume hoodies are already a common sight at Comic Con. “It was pretty crazy when we first saw the custom ones, now they’re being manufactured,” Rodriguez said. “It’s pretty cool to have a design that people can wear on the street and not feel ridiculous in.”

The same was true when DC unveiled the new Batgirl look. Fans wasted no time working on their costumes. “By the end of the first day, literally, there was fabric being cut for costumes,” Stewart said. He opted for a purple and yellow scheme as a nod to the Sixties-era television Batgirl, but gave her a hipper look with more practical considerations, like a snap-on cape, leather jacket and yellow Doc Martens. “The Doc Martens web site went down for a couple of hours because people were trying to buy those yellow Docs,” he said.