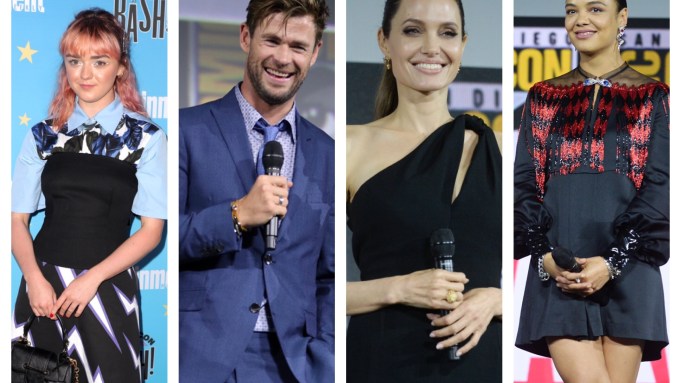 Cosplayers may go all-out with their Comic-Con looks, but celebrities brought their fashion A-games to this year’s convention.

The annual event brings together a host of actors to give fans an inside look at their favorite TV shows and movies. This year in particular, Marvel Studios’ massive phase four announcement — where 11 projects were unveiled — made the convention arguably the most jam-packed with celebrities.

At the San Diego Convention Center’s famed Hall H, Marvel Studios revealed the latest installment of its “Thor” franchise, with Chris Hemsworth, dressed in an Etro suit, and Tessa Thompson, dressed in Gucci, revealing the upcoming film, “Thor: Love and Thunder,” to be released in 2021. Reprising her role as Dr. Jane Foster, Natalie Portman, dressed in Dior, threw fans into a frenzy when it was revealed she would be playing female Thor in the new film.

After rumors swirled around the cast of the upcoming “The Eternals” film, Marvel Studios brought together the movie’s official cast, which includes Angelina Jolie, dressed in Saint Laurent; Salma Hayek; Richard Madden, and Kumail Nanjiani, among others.

Scarlett Johansson, dressed in David Koma, made her Comic-Con return with the announcement of her Marvel Studios prequel film “Black Widow,” which has been highly anticipated by fans since her entrance into the cinematic universe in 2010 in “Iron Man 2.” Johansson was joined by Rachel Weisz, David Harbour, Florence Pugh and O.T. Fagbenle.

Click through the above gallery to see more celebrity fashion from San Diego Comic-Con.

WATCH: Get an Inside Look at Fendi’s Couture Show