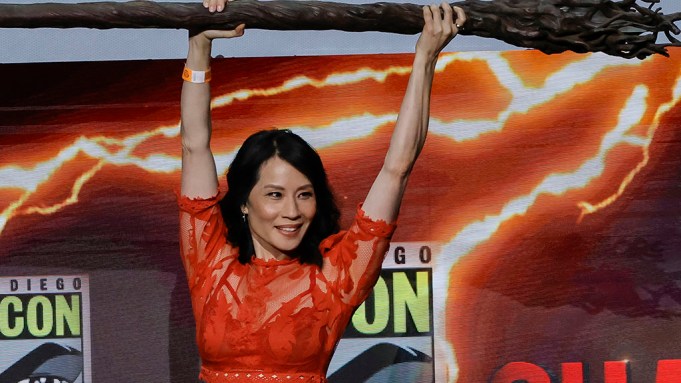 Lucy Liu made a much-anticipated appearance at Comic-Con International in San Diego, Calif., on July 23 to promote her new villainous role as Kalypso in DC’s upcoming film “Shazam! Fury of the Gods.” To debut the superhero movie’s trailer alongside her co-stars, the 53-year-old actress chose a fiery designer look that captured attention with its vibrant play on femininity.

The star wore a pair of subtle dangling silver earrings and a collection of simple silver rings as her only jewelry. To complete the look, Liu wore her mid-length black locks in a loosely curled style with a natural glowy blushed makeup look and a statement persimmon lip.

The actress carried a black Mark Cross bag with a gold chain strap when off-stage. Liu was styled by Sarah Slutsky for the event.

During the panel, Liu showcased her character’s weapon from the soon-to-be-released “Shazam! Fury of the Gods” film, raising a broom-like prop above her head. The same prop can be seen in the trailer for the film, only broken in half. Notably, Liu’s upcoming role as Kalypso wasn’t taken directly from DC lore. Instead, the super-villain is inspired by the similarly-named Calypso in Greek mythology, the nymph daughter of Athens with the gift of immortality.

Liu has favored television more than movies in recent years, making the upcoming film her first major movie role since 2012’s “The Man With the Iron Fists.” “Shazam! Fury of the Gods” is set for release on Dec. 21.