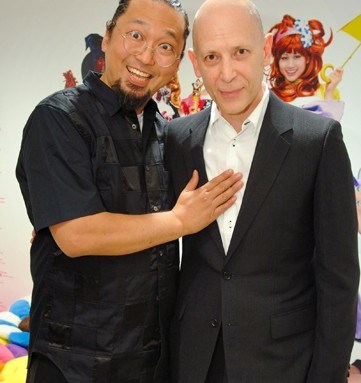 PAGE TURNER: Vogue Nippon and Comme des Garcons’ feted their new temporary store “Magazine Alive” in Tokyo’s Aoyama district Wednesday evening, attracting a large crown of fashion editors, Takashi Murakami and a camera-shy Rei Kawakubo and Junya Watanabe. The space- the same one the Japanese brand used for its one-off Louis Vuitton boutique- sells an intriguing mix of fashion and accessories, from t-shirts bearing the manga likeness of Hedi Slimane, Marc Jacobs and Donatella Versace, to silk gowns from Undercover, knits from Martin Margiela and transparent plastic handbags from Loewe. The content of the store will change from month to month to coincide with the contents of each new issue of Vogue until “Magazine Alive” finishes its run in November. In keeping with the July’s manga-themed issue, Murakami decorated the second floor of the store with his signature flowers while Karl Lagerfeld crafted an original window display featuring mannequins clad in silver lame and miniature dolls in quilted get ups. “His face is like a manga,” quipped Adrian Joffe, CdG’s managing director and Kawakubo’s husband, as Murakami hammed it up for the cameras. While Joffe admitted he isn’t a fan of all the products of the store, he said the project came together nicely. “I think it’s always so interesting that Rei is meeting with other people, like with Louis Vuitton [and] having Chanel here,” he said. “It’s great.”