BOOZY STATE OF MIND: American painter Laurance Rassin — best known in the art world as an international star whose impressionistic works bring to mind Picasso and Matisse — has a pops gig in addition to his art work and fashion designs.

The artist has reinvented the ice pop via Fruta Pop, which takes out the high fructose corn syrup and adds in fresh fruits and vegetables, while its “poptails” add a small amount — less than 5 percent — of alcohol infusion. Rassin is a cofounder of the company. Flavors available on the company’s site for the 3 oz. pop include nonalcoholic fruit and juice pops, cold-brew coffee pops and the boozy poptails in flavors of Coconut Rosé, Sparkling Prosecco Mango Mimosa, Moscow Mule and Brosé Rosé. The pops can be ordered for delivery anywhere in the world.

On Sunday and Monday, Rassin was holding court at the contemporary fashion trade show Fame at the Jacob K. Javits Convention Center in Manhattan with the Fame logo emblazoned on two pop flavors, Watermelon Margarita and Pina Colada. It’s the latest event-branding campaign for the pops. Past campaign clients have included Banana Republic, Two-Faced, Andaz hotel, Warner Bros., Orla Kiely, Project X, French Connection, Bloomingdale’s and Nordstrom. Each pop is $6, while an included cozy is another $3.

Rassin has been working on Fruta Pop for the past two years, while still painting and taking selected artworks for printing onto textiles for dresses and other apparel.  He has a pop-up store on Chelsea at 548 West 28th Street that shows his art-printed dress designs, as well as select pieces of art.

Fruta Pop just launched its augmented reality app for events-driven campaigns where the interactive user can scan a Fruta Pop label to see a connected video. The user also has the option of changing the video that gets augmented, such as seeing themselves in a video on the product. They can also take a picture within the app and have it uploaded to their Instagram account. Another feature he’s working on that won’t be available for a few more weeks is the Scavenger Hunt, which gamifies the app. Users who find and collect all of the Fruta Pop labels and view the AR videos are offered a coupon for redemption on a future purchase. 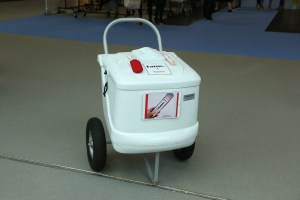