Nadja Swarovski, Amber Valletta and Renzo Rosso are among industry figures in Denmark for a sustainability summit. 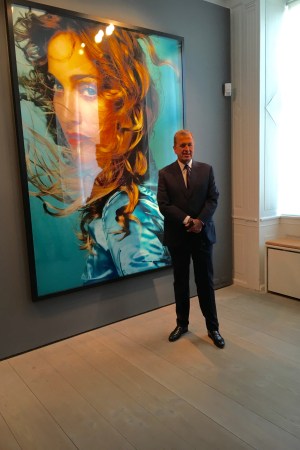 This Luxurious AC/DC Tribute Line Has a Chanel Connection

DANISH DELIGHT: It was 75 degrees and summery on Wednesday in the Danish capital where guests including Amber Valletta, Nadja Swarovski and Renzo Rosso flocked to the GL Strand museum for a preview of Mario Testino exhibition “No Limits,” which opens Friday.

“It feels like Rio here,” noted Testino, whose large-format images were displayed on three floors. Photos include the 2002 shot of Kate Moss from the National Portrait Gallery; Madonna’s “Ray of Light” album cover from 1998, and the official portrait for the engagement of Prince William and Kate Middleton.

The opening came on the eve of the Copenhagen Fashion Summit at the Copenhagen Concert Hall. It marks the fourth edition of the biannual sustainability event. Organized by the Danish Fashion Institute on behalf of the Nordic Fashion Association, it draws around 1,200 fashion industry delegates.

“The first thing you notice here is the fresh air,” noted Swarovski, wearing an Azzedine Alaïa dress and Lanvin jewelry. The executive board member is to participate in a panel debate on fashion and philanthropy, alongside Susan Rockefeller. “We’ll talk about CSR and how it’s linked to philanthropy,” she explained. “It’s a totally different agenda [than in Cannes],” she said with a laugh. (The Austrian crystal maker is present at the Cannes Film Festival for the 17th consecutive year nonetheless.)

Valletta flew from Los Angeles with her 15 year-old son. “It’s our first time here,” she said, sporting a Balmain dress for H&M. “We took a walk this morning and had dinner last night at a really good restaurant called Alberto K. It was really nice,” she said. “I have an online store, Master & Muse, focusing on sustainable fashion, but I have been an activist for 20 years,” she explained. As the summit cohost, she planned to wear an outfit by designed by the American label Svilu. The duo behind Svilu is one of the nine designers competing for The Denim Challenge, coinciding with the summit and aiming at promoting design with sustainable denim.