A number of art, fashion and entertainment institutes have closed in response to the outbreak.

The impact of the coronavirus pandemic has touched virtually every industry, leading to the closures of a number of institutions in New York City and nationwide.

As COVID-19 cases continue to increase globally, New York Gov. Andrew Cuomo announced on March 12 that there will be an indefinite ban on gatherings of more than 500 people. New York City Mayor Bill de Blasio also declared a state of emergency in New York City, followed by President Trump declaring a national emergency on March 13.

Read More: Which Major Events Are Canceled Because of the Coronavirus?

New York City institutions have responded to the virus and subsequent ban on large public gatherings by shuttering their doors for the time being. Here, WWD compiles a list of the museums, institutions and fashion schools impacted by the COVID-19 outbreak. 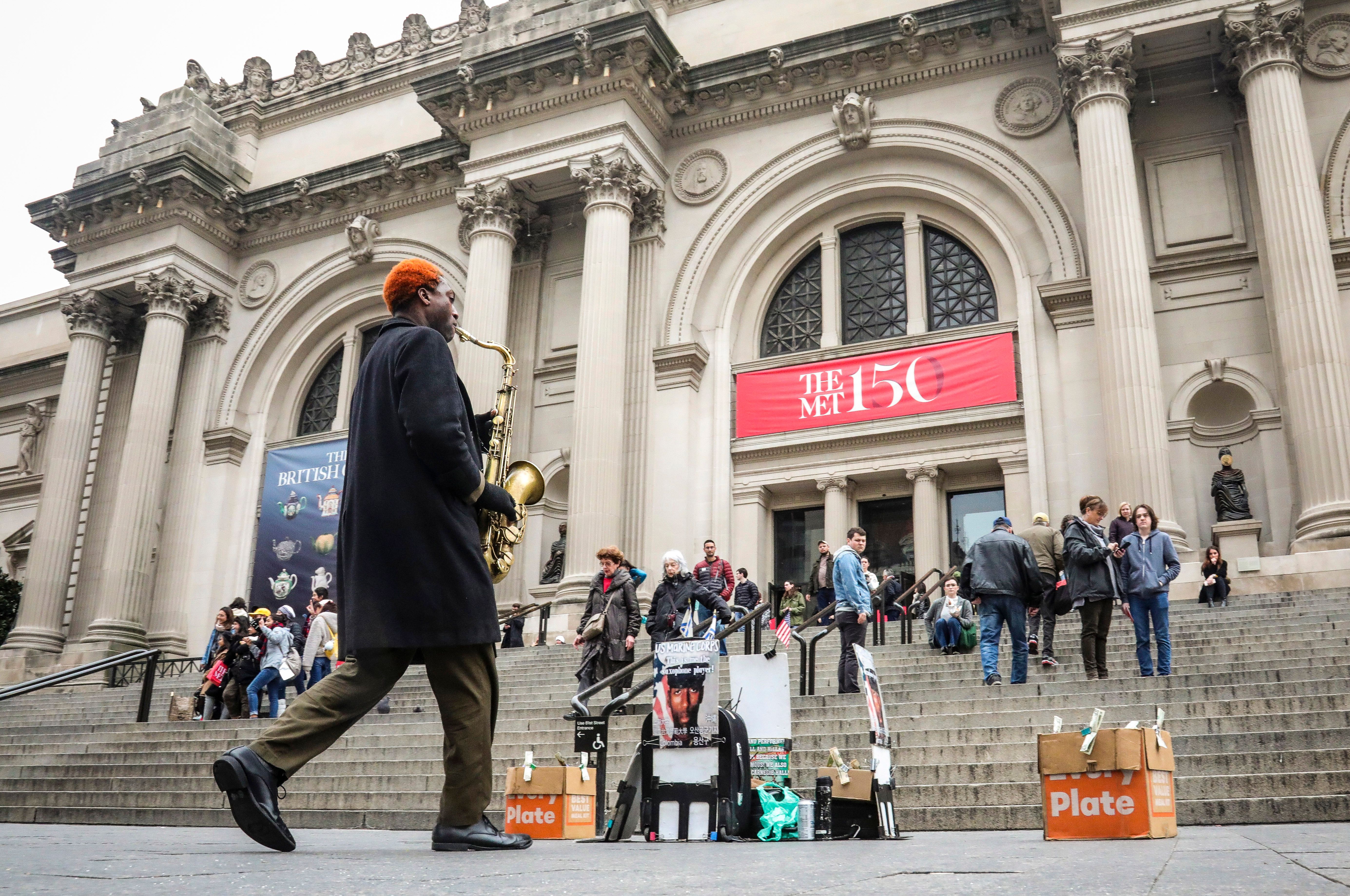 The American Museum of Natural History has temporarily closed as of March 13.

The Brooklyn Museum is closing to the public starting March 13 and all programs are postponed until further notice, according to a March 12 release from the museum.

The Frick has temporarily closed as of March 12, canceling its New Members Reception on March 24, its Teen Night on March 27 and its First Fridays event on April 3, according to its web site.

The Solomon R. Guggenheim Museum is temporarily closing to the public as of March 13.

On March 12, the Jewish Museum announced it will be closed to the public starting on March 13.

The Metropolitan Museum of Art

The Metropolitan Museum of Art announced on March 12 that it is closing its doors — as well as its other museums, The Met Breuer and The Met Cloisters — starting March 13. It is scheduled to reopen to the public on July 1.

“The Met’s priority is to protect and support our staff, volunteers and visitors, and we have been taking several proactive, precautionary measures, including discouraging travel to affected areas, implementing rigorous cleaning routines and staying in close communication with New York City health officials and the Centers for Disease Control,” museum president and  chief executive officer, Daniel H. Weiss, said in a statement.

The Museum of Modern Art

MoMA announced on March 12 it is temporarily closing its doors — as well as MoMA PS1 and the MoMA Design stores — starting March 13.

The Smithsonian announced on March 12 it is closing its 19 museums in Washington, D.C., the metropolitan area and New York City — including the National Zoo — temporarily as of March 14.

Museum Day 2020, which was scheduled for April 4, has also been canceled. The museum is postponing and canceling all events scheduled through May 3.

The Whitney Museum is closing as of March 13 at 5 p.m. 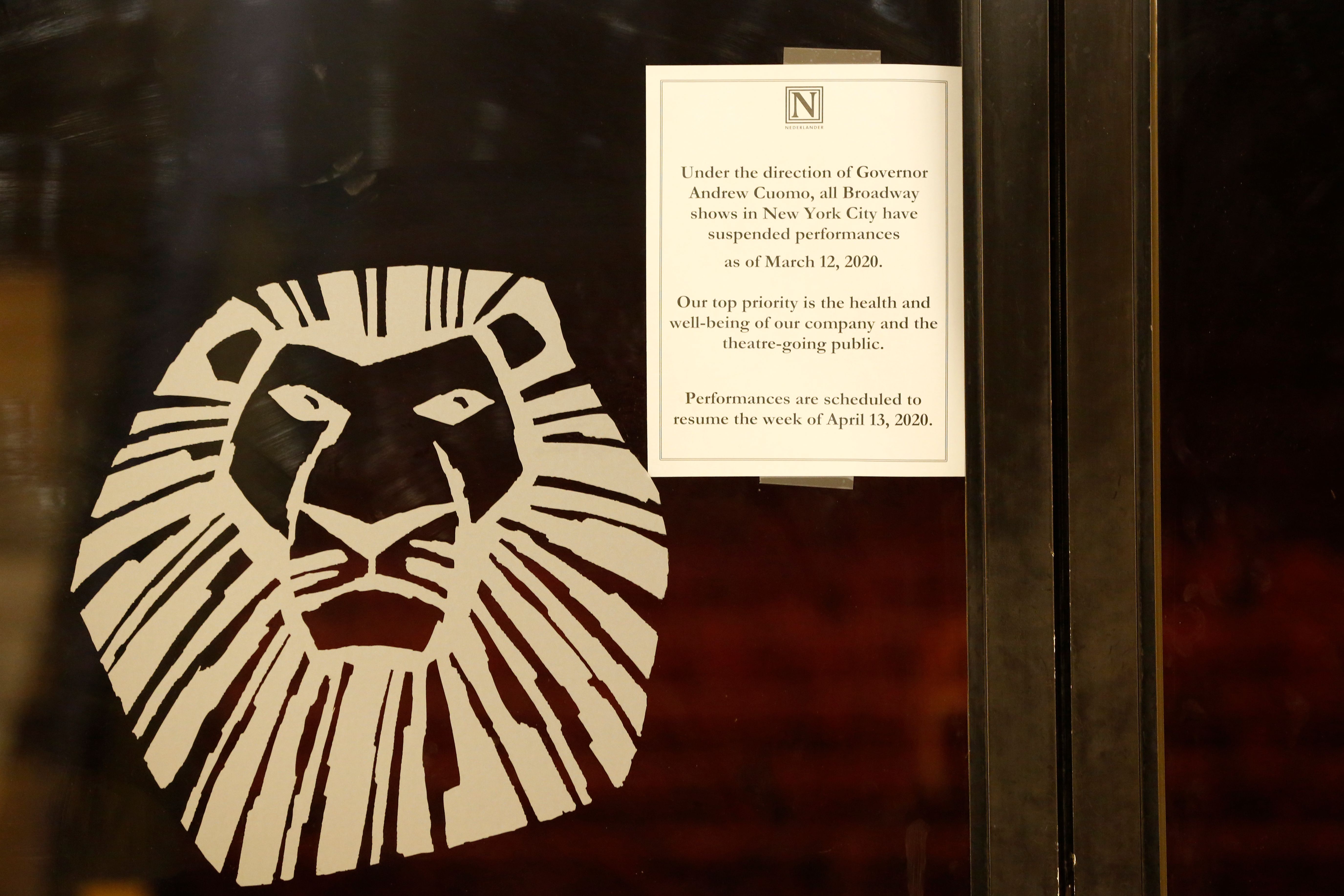 Sign announcing the suspension of all Broadway shows on a door at the Minskoff Theatre, where “The Lion King” had been playing, in New York.  Kathy Willens/AP/Shutterstock

All New York City Broadway shows have been canceled as of March 12. Shows were set to begin again during the week of June 7, but the date has been pushed back to Labor Day as of May 12.

Carnegie Hall announced on March 12 it has canceled all events from March 13 to 31.

“With the health and safety of the public, our artists and our staff as our foremost priority, Carnegie Hall has canceled all events from March 13 through March 31 in an effort to reduce the spread of the new coronavirus,” the institute said in a statement.

The institution later announced it was canceling the remainder of its programming through the 2019-2020 season.

The David Zwirner gallery stated on March 13 that it is closing its New York, London and Paris galleries. It is expecting to reopen its Hong Kong gallery soon.

The Gagosian announced on March 13 it will be closing all of its galleries globally, “in an effort to help contain the spread of COVID-19 and to prioritize the safety of our staff, artists and community.”

The Metropolitan Opera announced on March 12 that it is suspending all performances through the rest of the 2019-2020 season, which was slated to end on May 9.

The New York Philharmonic has canceled all concerts through June 13.

The New York Public Library announced on March 13 that it is closing its locations indefinitely as of March 14. All events and programming are also canceled. 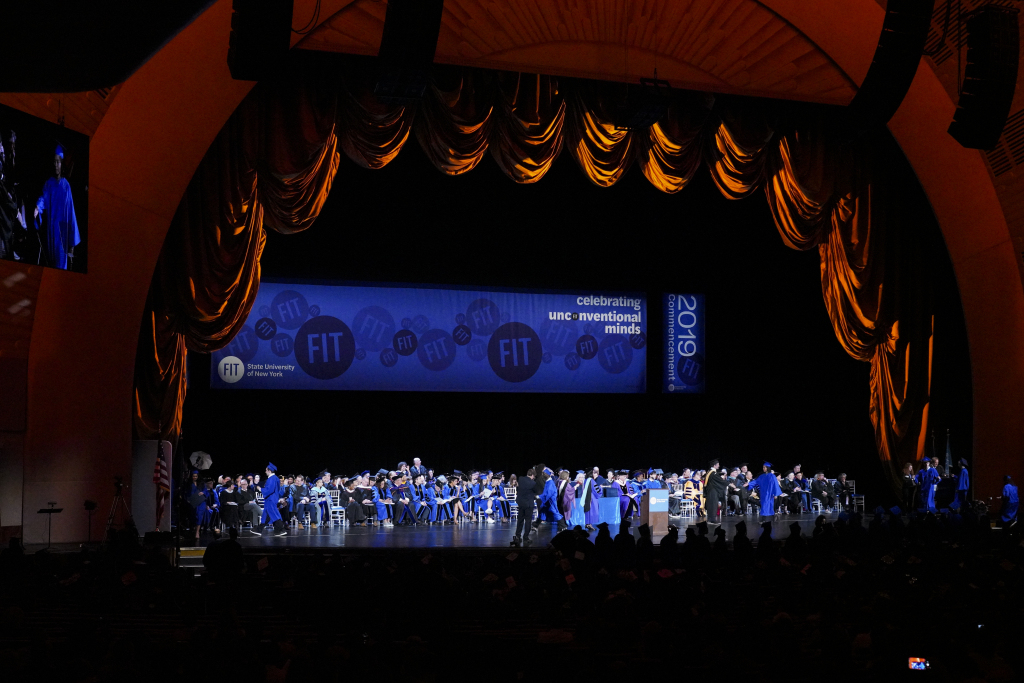 The Fashion Institute of Design & Merchandising

FIDM, located in Los Angeles, has temporarily suspended in-person classes. The school has no cases of COVID-19 on campus and is suspending classes as a precautionary measure. Classes are canceled between March 12 and 23 for professors to prepare for the transition.

The Fashion Institute of Technology

The Fashion Institute of Technology, a SUNY school, is moving toward virtual classes for the remainder of the school year. The move is part of Governor Andrew Cuomo’s announcement that all state and New York City government-affiliated universities would move toward remote instruction as of March 19.

Classes are suspended between March 16 to 22 to allow professors to prepare for online class instruction. Students are allowed to remain in dorm residences and use campus resources such as dining halls, libraries and medical services.

Parsons School of Design — and its affiliate, the New School — announced on March 11 that classes will be held remotely through the end of the school year. Classes have been canceled from March 23 to 27 to give professors time to transition to remote instruction.

Residence halls and other campus buildings have closed.

The Pratt Institute has canceled in-person classes for the remainder of the spring 2020 semester for its Manhattan and Brooklyn campuses. Students will instead be doing their courses virtually.

The Rhode Island School of Design is canceling all in-person gatherings of more than 100 people as of March 16 for the remainder of the spring semester. Classes will resume as of March 30 and will be conducted remotely.

The School of Visual Arts, which is based in Manhattan, is suspending classes between March 11 and 15. All undergraduate and graduate courses will resume online as of March 16.

The Fashion Weeks and Major Events Disrupted Because of Coronavirus

How Coronavirus Has Impacted the Fashion Industry

These Fashion Industry Leaders Are Raising Funds to Fight Coronavirus