A guide to the businesses and institutions that are closed due to the pandemic.

A woman wears a mask as she crosses the Brooklyn Bridge, in New York.

As the coronavirus pandemic continues, local governments are taking drastic measures to contain the virus by having residents essentially on lockdown.

In New York City specifically businesses, museums, cultural institutions and schools have begun shuttering their doors at a rapid pace in accordance with new restrictions set by local officials.

New York Gov. Andrew Cuomo announced on March 12 there would be an indefinite ban on gatherings of more than 500 people, with Mayor Bill de Blasio following by declaring a state of emergency in New York City. As of March 15, the mayor has announced additional restrictions on public schools, restaurants and nightlife following the Centers for Disease Control and Prevention’s new recommendation that large gatherings of more than 50 people should be canceled for the next eight weeks.

As the virus continues to alter everyday life on a daily basis, here is everything you need to know about the impact of coronavirus in New York City.

Is New York City on lockdown?

New York City, however, is not on lockdown. Transportation — including subways, trains and buses — are still operating and residents are permitted to leave the city. Nonetheless, New Yorkers are still encouraged to stay at home in accordance with the “New York on Pause” order.

On March 15, the mayor announced that all New York City public schools will be shut down as of March 16 to contain the COVID-19 pandemic. Starting March 23, schools will transition to virtual classes.

The mayor stated he hopes to reopen schools by April 20, but explained that schools may stay closed through the remainder of the school year. Schools will remain open during the week of March 16 for students to pick up meals and then going forward alternative sites for meal pick up will be announced at a later time.

New York City has the largest public school system in the country, with roughly 1.1 million students in more than 1,800 schools, according to the New York City Department of Education. 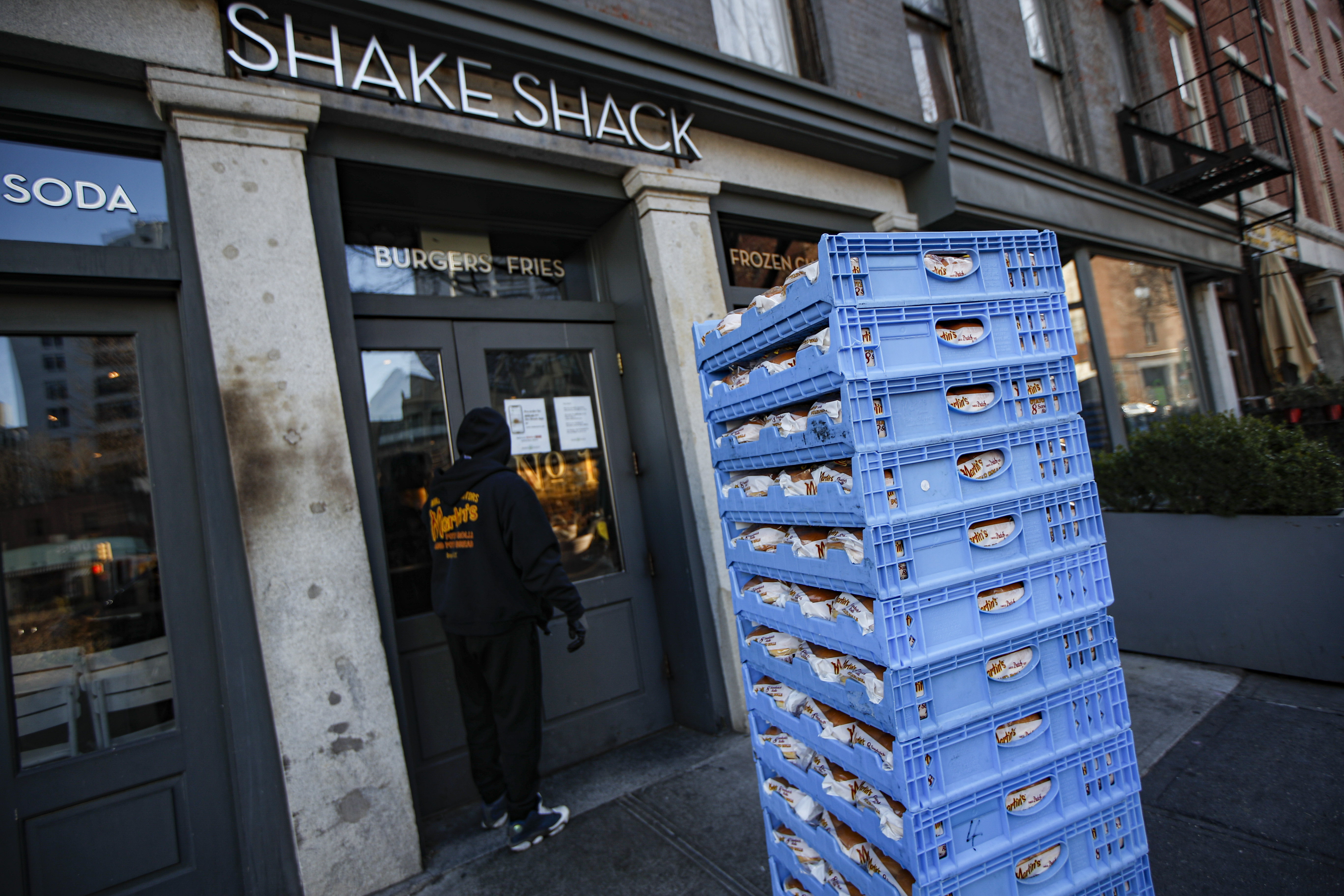 Bread delivery is made to a Shake Shack restaurant in Brooklyn on March 16, 2020.  John Minchillo/AP/Shutterstock

The mayor announced on March 15 that the city will close its bars, restaurants and cafés effective March 17 at 9 a.m. The order permits these businesses to offer take-out and delivery food options. The closures will be in effect for an indefinite time.

Grocery stores, pharmacies, gas stations and other essential businesses are remaining open in the state of New York.

Are New York City entertainment options affected by this order?

In addition to bars, restaurants and cafés, the mayor’s order also shutters nightclubs, movie theaters and concert venues. The closures go into effect on March 17 at 9 a.m. for an indefinite period of time.

On March 12, all New York City Broadway shows closed their doors in accordance with Cuomo’s initial ban on large gatherings of more than 500 people.

Other cultural institutions, including Carnegie Hall, the Metropolitan Opera and the New York Philharmonic, have also closed their doors due to COVID-19. 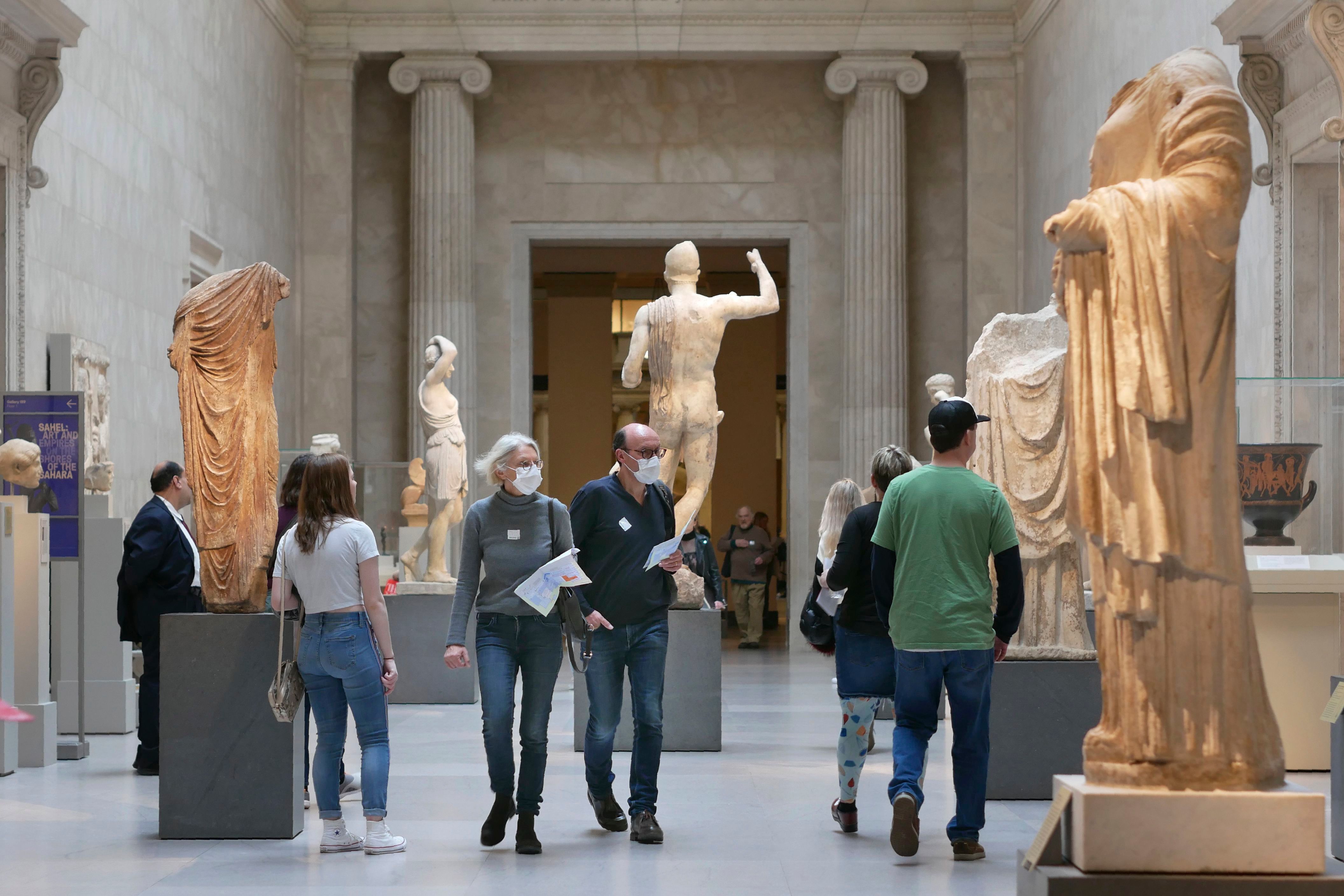 Two visitors wear masks as they walk through the Metropolitan Museum of Art in March 2020.  Seth Wenig/AP/Shutterstock

Most major New York City museums announced their closures on March 12, including the Metropolitan Museum of Art, the Guggenheim, the Frick Collection, the Brooklyn Museum, the American Museum of Natural History and the Whitney Museum, among others.

New York, New Jersey and Connecticut officials have ordered casinos, gyms and movie theaters to close on March 16 at 8 p.m, in addition to other similar measures, such as the closure of schools and nonessential businesses.

A number of retailers have announced that they are shuttering their doors globally to help contain COVID-19, including Nike, Apple, Urban Outfitters, Madewell, Everlane, Lululemon, Abercrombie & Fitch, Glossier and Anthropologie, among others.

What other businesses are shutdown?

On March 20, Gov. Cuomo announced that all barber shops, nail salons, hair salons, tattoo shops and other similar businesses will close down as of March 21 at 8 p.m.

The same order was issued in Connecticut, New Jersey and Pennsylvania.

A number of New York City-based universities are transitioning their students to online or remote classes, including New York University, Columbia University, the Fashion Institute of Technology and other SUNY schools, CUNY schools, the New School and Pratt Institute, among others.

The Fashion Weeks and Major Events Disrupted by Coronavirus

Which Major Events Are Canceled Because of Coronavirus?

These Fashion Industry Leaders Are Raising Funds to Fight COVID-19