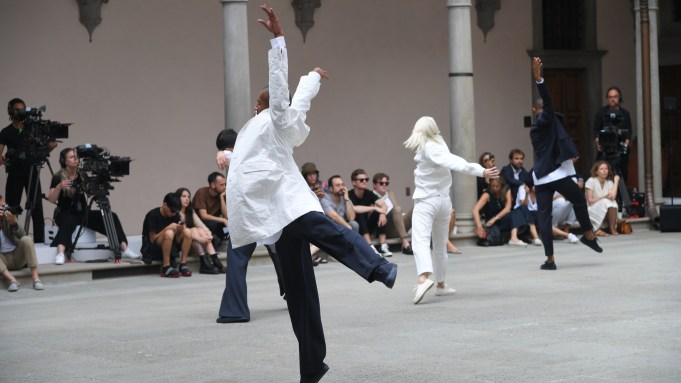 LET’S DANCE: What better way to road-test a capsule of men’s wear essentials in movement than a performance based on the subtlety of everyday actions by British choreographer Wayne McGregor?

That was thinking of Karin Gustafsson and Christophe Copin — respectively creative director and newly appointed head of men’s wear at Cos — for bringing to life a soon-to-launch men’s capsule dubbed Soma.

The serene performance, featuring members of McGregor’s company dressed in items from the line, was held on Wednesday in the courtyard of the Istituto Degli Innocenti in Florence, and was followed by a presentation of the capsule at the local Cos flagship. Items included long bias-cut collarless shirts, a minimalist waxed and washed cotton coat with a crisp, papery surface and lightweight tailoring, in a palette limited to white, navy and gray mélange.

A limited quantity of the pieces worn by the dancers went on sale in the Florence store following the event, but the line will launch online internationally in September.

Speaking to WWD, Copin said a lot of fabric research went into the collection, down to “the sound of the fabrics when in movement.” He argued the decision to limit the capsule’s availability to online was to make it more democratic and open it to a wider audience. The dance performance was also live-streamed on the brand’s web site.

In terms of communicating the textures through screens, the designer said they have an “amazing” new way of presenting the clothes planned for the launch — one where “you can feel the fabric, and how you can wear a piece, even if you can’t touch it.”

Regarding the brand’s history with capsules, the London-based fashion label in 2016 released a capsule inspired by Agnes Martin, timed with a retrospective of the artist’s work at the Solomon R. Guggenheim Museum, and has collaborated on a couple of capsules for Mr Porter, but Copin said there is “no plan” in terms of follow-up Soma capsules.