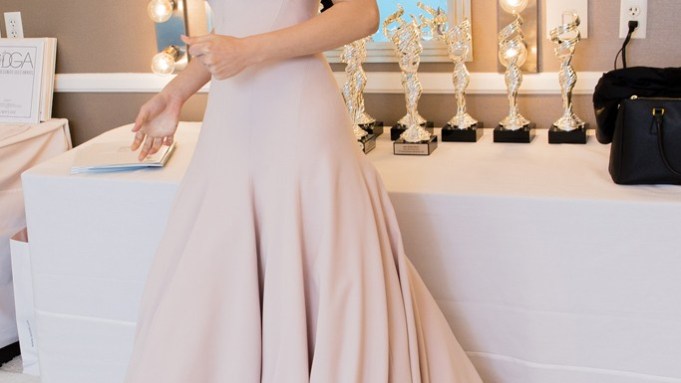 Michelle Monaghan, January Jones, Emmy Rossum, and Mindy Kaling were among the stars who walked the carpet at this year’s 17th annual Costume Designers Guild Awards held at the Beverly Hilton Hotel in Beverly Hills, but all eyes were on the below-the-line individuals who make them shine on-screen.

“Actors are used to being the stars, but tonight it’s all them,” said Rossum, who emceed the Lacoste-sponsored affair in a Donna Karan Atelier gown. “Even though it has a train, it doesn’t have a color. I didn’t want to upstage any of the costume designers,” she said of her nude-pink gown.

As if to drive the point home, Kaling bypassed press when a reporter asked who she was wearing. A publicist for the dress’s designer didn’t miss a beat.

“It’s by Salvatore Perez. You should interview him,” said his rep, referencing “The Mindy Project” costume designer.

“We started making the dress weeks ago out of an Indian sari,” said Perez, who is also the CDGA L.A. president. The designer, who also has “Pitch Perfect 2” in the pipeline, has a collection debuting in September for the Home Shopping Network. “So the masses will now get to buy the clothes that Mindy gets to wear.”

“I’m terrible. I waited until the very last minute,” said Summerville, who recently reteamed with David Fincher for an upcoming HBO series “Living on Video.” “Luckily, I have a dear friend who is really good friends with DSquared. They sent [the dress] to me and I had it altered today.”

“This is the coolest award show for sure. I’ve been to a few of these and I have one question… Can I keep the tablecloth?” said Linklater, referencing the sequined décor, while accepting his award.

An hour before the ceremony came to an end, Lacoste Spotlight honoree Naomi Watts and her presenter Laura Dern, fresh from Bulgari’s Save the Children soiree, slipped into the show.

“That was really emotional,” said Watts, after watching her performance reel. Just as she started to get serious, she stopped. “Wait. Do I have side boob? I’ve been known to have a wardrobe malfunction in my time. Let’s start that over.” Then it was back to business. “Watching the clips I feel really glad that I have in my contract that I get to keep all the clothes. I’m just reminded of how many good outfits there have been. Seriously, it’s such an honor to be recognized by those who I truly admire.” She went on to tell the audience that her mother, who was a costume designer, hand-sewed her clothes growing up. “Sometimes a duvet cover would become a dress not unlike the Von Trapp family in ‘The Sound of Music.’”

When the night came to an end, Rossum was ready. “I’ll be heading home immediately to walk my new dog who will have invariably peed under the piano. And it will end with gluten-free cinnamon raisin toast and—what’s on tonight?—probably the ‘Housewives.’”