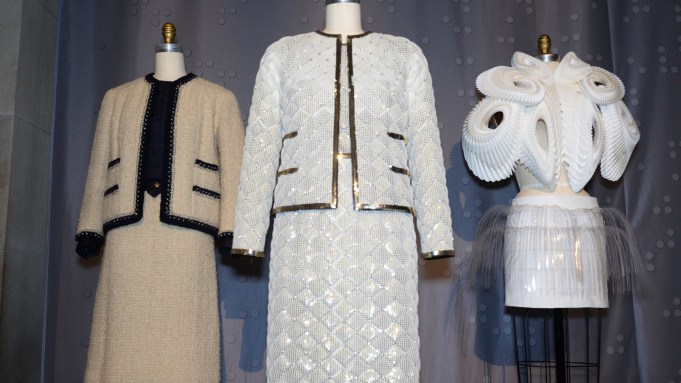 After telling guests how the Apple-friendly tunes that welcomed them Monday morning — Brian Eno’s “Music for Airports,” a mix of analogue and electronic sound — would be piped through the galleries when the show bows, Andrew Bolton, the Costume Institute’s curator in charge, detailed how the exhibition’s title was inspired by Fritz Lang’s 1927 sci-fi drama “Metropolis” and not Alex Garland’s 2015 “Ex Machina” as some had asked. The iconic older film begins and ends with the epigram, “The mediator between the head and the hand must be the heart,” Bolton explained.

“And given the dystopian vision technology presented in the movie, the epigram could quite easily have been the mediator between the hand and the machine must be the heart. In fact, the entire plot of ‘Metropolis’ unfolds as a dialectical treatise of man versus machine. And this oppositional relationship has played out in fashion since the birth of the couture in the mid-19th century…” he said. “And it’s worth pointing out the advent of haute couture coincided with the advent of the sewing machine. And one can’t help but wonder if the haute couture emerged as a response to fears surrounding the democratic possibilities of the sewing machine.”

The exhibition will be housed in two spaces in the museum — the Anna Wintour Costume Center and the Robert Lehman Wing. The former will represent the ateliers, tailoring and dressmaking and the latter will reflect the various métiers of haute couture — such as lacework, leather work, embroidery and feather work. Both spaces will unfold as a series of case studies in which examples of haute couture and ready-to-wear will be examined vis a vis one another.

Gesturing towards a pairing on display, Bolton said the Raf Simons’ designed 2015 Dior haute couture ensemble was handpleated using a pleating mold, a technique that was invented in the 1760s. The 1994 Issey Miyake “Flying Saucer” dress next to it was “a revolutionary departure from traditional pleating because the pleats were applied after the fabric was cut and sewn, so that you construct a garment that is two to three times its intended size and place the garment in the press between two sheets of paper.”

Shohei Shigematsu, director of OMA New York, is leading the exhibition design with the Met, in the lead-up to its May 5 opening, according to the museum’s director Thomas Campbell. He also singled out Jony Ive, chief designer for Apple, the exhibition’s sponsor, as well as Condé Nast for its additional support and Wintour.

An Iris van Herpen dress with handstitched strips of laser-cut silicon feathers, white cotton twill and hand-applied silicone-coated gull skulls with synthetic pearls and glass eyes was displayed with an Yves Saint Laurent evening dress with hand-glued bird-of-paradise feathers from the designer’s fall 1969 collection. Bolton made the point that van Herpen is known to collaborate with artists, architects, scientists, engineers and computer designers, which she sees as 21st century versions of more traditional collaborations between couturiers and artisans. To that end, also on view was her 3-D printed spring 2010 ensemble in white polyamide with machine-sewn white goat leather and handout acrylic fringe. Done in conjunction with the architect Daniel Widrig, that creation features a bodice with nearly 10 lines within one millimeter — which Bolton compared to almost the details of a fingerprint.

Monday morning’s first glimpse featured the show’s inspiration — an elaborate Karl Lagerfeld-designed wedding ensemble for the fall 2014 Chanel couture collection — a superior example of the handmade and machine made in one ensemble. The design of the train was hand-finished and then computer — manipulated to give the appearance of a pixilated baroque pattern — initially painted by hand, then transfer printed by machine with rhinestones and then embroidered by hand with pearls and gemstones. In total, the train required 450 hours of work, said Bolton, adding that Lagerfeld described the scuba knit dress as haute couture without the couture because it was molded and entirely machine sewn.

“What all of these examples reveal is that the hand and the machine work in tandem in the creation of fashion for haute couture or ready-to-wear. By attempting to unravel as well as to reconcile the oppositional relationship between the hand and the machine, the exhibition intends to advance a new paradigm for fashion which is more germane to our age of technology,” Bolton said.