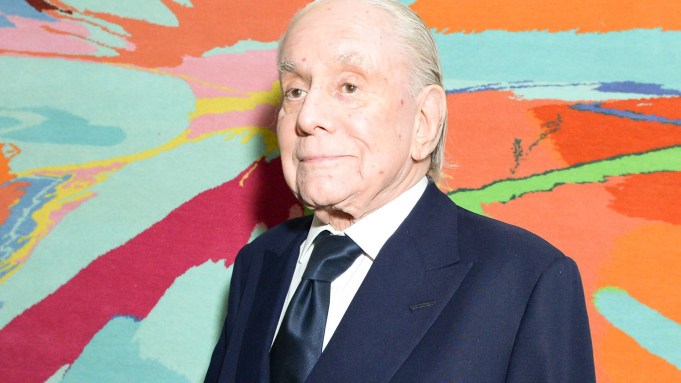 It had not been determined whether he died Wednesday evening or Thursday morning, according to Chris Sheppard, executive vice president of Kenneth Jay Lane Inc.

After attending school at the University of Michigan and Rhode Island School of Design, the Detroit native made his way to New York where he worked on Vogue’s art team in 1954 before venturing into design at Delman Shoes. He later worked for Roger Vivier at Christian Dior before striking out on his own in 1961. As a resourceful young designer, Lane repurposed some of the scrap leather that were not used for Vivier-approved heels and wrapped them around bangles that he had bought from Lamstons, a five-and-dime-type store. Accenting footwear with jewels piqued an interest in costume jewelry design.

Lane changed the landscape of costume jewelry, adding souped-up color, drama, luxury and a wide variety of ethnic motifs, and making it exclusive. Many of his customers combined his pieces with their “real” jewels…and it was often impossible to tell the difference. As he once put it, “Our jewelry is designed for people who want to be noticed.”

The designer would give earrings and pins to his most photographed client Jacqueline Kennedy Onassis that he thought she would like. And former First Lady Barbara Bush wore his three-strand necklace so often she said that, if she took it off, her head would fall off.

Carolina Herrera said Thursday, “Kenny Lane is much more than just the greatest costume jewelry designer in the world. He was a great American personality. He lived his dream because he believed it. He will be missed by all his friends around the world. I love him very much.”

During his many years in fashion, the designer’s pieces were worn by such style setters as Audrey Hepburn, Diana Vreeland, Lena Horne, Elizabeth Taylor, the Duchess of Windsor, Princess Diana and Nancy Reagan. In an interview with WWD last month regarding his loan of 25 paintings to the Metropolitan Museum of Art, the designer recalled his days advising his friend Vreeland years ago, by creating an endless number of tiaras and handling the jewelry for The Costume Institute’s exhibitions. “She got these mannequins from Austria, I think, from a company called Schleppe. They were very streamlined, and she would say, ‘I need more Schleppies.’ She was a hoot,” Lane said.

Diane von Furstenberg called Lane “a true friend and a mentor. When I came to New York, he totally took me under his wing…introducing me to buyers and fashion editors. We traveled to Egypt together, he introduced me to orientalist art. He was an amazing talent and a visit to his studio was a most glamorous event.”

“I am truly saddened to lose one of my dear friends,” Tory Burch said. “He was an icon, a true eccentric with a meticulous eye and brilliant sense of humor. Kenny was a loyal friend and truly one-of-a-kind. I loved his honesty, irreverence and his take on just about everything. We often spoke about manners; how handwritten notes should not be obsolete and glasses should never touch during a toast. Kenny had an opinion on many things but I always found him to be modern and on point.”

Lane’s fan base also included Brooke Astor, Princess Margaret, Babe Paley, Gloria Guinness, Jacqueline de Ribes, Pamela Harriman and Lee Radziwill. He married a BP, too, Nicola Samuel Waymouth, a red-haired socialite who was a great model for his designs. The marriage was short-lived, due to Lane wanting children, and Waymouth wanting to party. They parted after two years. His jewelry often appeared on such soap operas as “Another World,” “Guiding Light” and “Days of Our Lives.”

“I want to make real jewelry with not-real materials,” Lane once said. “I work in less commercial ways than most manufacturers of costume jewelry. My designs are all original — original from someone. There are original ideas, but a lot of good designing is editorial, choosing what is available idea-wise and applying these ideas practically. I think it’s called ‘having the eye.’ It isn’t necessarily reinventing the wheel.”

While an assistant designer at Delman, he started creating jewelry at night. When his night job became more prosperous than his day one, he started his own accessories business in 1961. Creating shoes embellished with sequined balls for Arnold Scaasi, Lane made some earrings to match. They sold, and he began making other accessories. “A whole new group of Beautiful People began to exist,” he said. “They started dressing up, and costume jewelry was rather dull. I believed that it didn’t have to be.”

So he took to dressing the Beautiful People, and with his sharp clothes and quick-witted charm, became one of them. In the Sixties, he sported such sartorial whimsies as white or velvet suits, attending all of the glittery parties of the time, among them Truman Capote’s celebrated Black and White Ball. Lane even landed on Vanity Fair’s International Best-Dressed List in 1974.

An inveterate traveler, he inevitably found inspiration globetrotting and returned to New York with an abundance of keepsakes – glittering dog collars, paisley-patterned jewelry from India with multicolored stones, Balinese earrings with bells on chains, Italian bracelets and rings with classical motifs, pre-Columbian necklaces from Central America, Topkapi-inspired pieces from Istanbul, hieroglyphic-inscribed pendants from Egypt, and dragon-inspired bangles from China.

Art Deco designs were also of particular interest. Lane had the stones he used made in Germany, because he was not impressed with the quality of fake jewels he found elsewhere. He collected Russian cigarette boxes, Asian antiques, bronzes and crystal balls. Just as his interests were plentiful, so was his portfolio, adding licenses for home décor and other products, as well as a robust jewelry line for QVC.

Earlier this summer Lane loaned pieces from the vast art collection that adorned the 26-foot walls of his Upper East Side apartment including works by Horace Vernet, Benjamin-Constant, Jean Lecomte du Nouÿ and Jean-Léon Gérôme to the Met. He became a member of the Costume Institute’s Visiting Committee in 2002 and was also a member of the Venetian Heritage International. A believer that glamour is year-round, Lane said last month, “I don’t exactly do collections — spring, fall, summer, etc. I do whatever comes into my mind whenever it comes in to my mind. That seems to have been working for the last 50 years, so…”

Price, who spoke with Lane on the phone every other day, said, “He was an incredible snob but a great pal. He could be difficult but you had to be on your toes. You had to read a lot. You couldn’t go out and just gossip. He was not that kind of guy.”

Much of his career is detailed in the 1996 book “Kenneth Jay Lane: Faking It.” In it, he recalled a glamorous party at Le Pavillion, which happened to take place on the night of the New York blackout of 1965 and continued by candlelight. Nevertheless, the women looked exquisite, many of them in his long earrings, with elaborate hairstyles reminiscent of Marie Antoinette, and the food was, somehow, still wonderful, Lane once said. More recently British filmmaker Gisèle Roman has been shooting a documentary about the gravelly voiced designer titled “Fabulously Fake: The Real Life of Kenneth Jay Lane.” The yet-to-be-released, behind-the-scenes film features von Furstenberg, Tory Burch, Joan Collins, Barbara Bush, Anne and Kirk Douglas, Ali MacGraw and Anna Sui, among others.

Lane counted Diana Vreeland as his greatest design influence. He told WWD their first conversation was about “boning” shoes, because he had just bought waxed calf shoes from Lobb, and she pointed out that a rhinoceros horn could not be found in the whole of New York. One of her most important pieces of advice to him, Lane always said, was, “You must always give ideas away. Under every idea is a new one waiting to be born.” For the prolific jewelry designer, that was certainly true.