Behind the Seams: Costumes for New York City Ballet’s ‘The Nutcracker’

WWD goes inside the NYCB’s costume atelier as the company prepares for its annual production.

What would “The Nutcracker” be without its pink tutus and illustrative sweets? The annual festive production is now under way at New York City Ballet, where it takes a staff of nearly 50 to craft and maintain the hundreds of intricate costumes required for George Balanchine’s holiday-season staple. WWD paid the company’s costume atelier a visit to see how they get it done.

Each year the city ballet’s in-house costume shop sees a mad dash in the lead-up to “The Nutcracker’s” five-week run at Lincoln Center, where the production is staged about 50 times. The task is one of historical reverence, as the company still uses original designs devised in 1954 by Balanchine’s chosen costumer Barbara Karinska, calling for some 150 looks with a cast ranging from ages eight into the mid-40s.

While ballet’s cascade of holiday-treat-inspired characters — hot chocolate, marzipan, candy canes and tea — appear effortless onstage, they require a taskmaster to see that they all get done. Enter Marc Happel, city ballet’s costume director who manages the shop’s tricks of the trade. That light pink tutu skirt? There’s actually “layers of flesh tulle, beige and layers of another pink underneath which gives it more depth,” Happel explained. An NYCB veteran of 13 years, Happel also double faces each of the skirt’s rhinestones, “so never do you see the back of a Swarovski crystal, it’s just a little detail that makes them sparkle that much more,” he said. 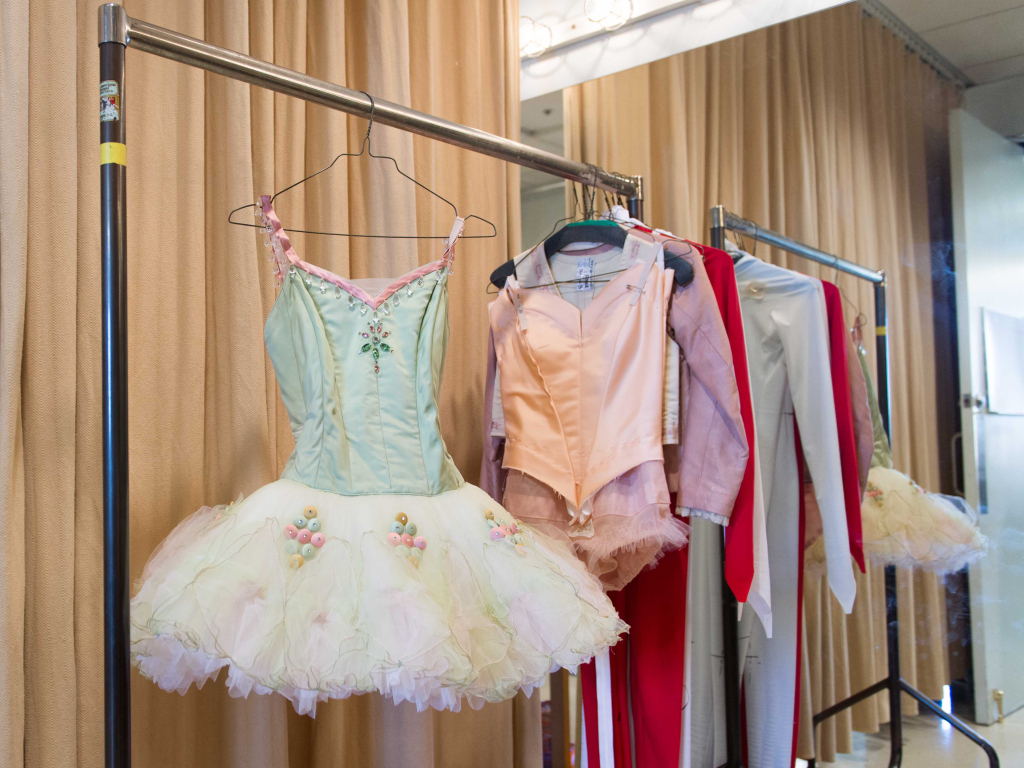 Like busy elves straight from a Christmas storybook, the costume shop’s sewers, fabric dyers and tailors hum away at sewing machines and dress forms smoothing satin panels and finishing paper-thin layers of tulle.

Amid the ruckus, dancers cast in the pivotal roles of Sugarplum and Dewdrop Fairy dropped by for fittings. Principal dancers get their own “Nutcracker” costumes tailored to their specific measurements for a glove-like fit, some taking more than 60 hours of labor to complete. While the Dewdrop’s costume appears featherweight with exposed corsetry and a flippant chiffon skirt, Sugarplum has two ensembles per show — a delicate pink look for Act One and a frothy pistachio green for the show’s second half.

“Our dancers like to keep a costume as long as they can. I’ve been told that, for them, it’s like a pair of pajamas — it just gets so comfortable they don’t even have to think about it, which is your hope,” said Happel.

WATCH: Get an Inside Look at The Nutcracker’s Ballet Costumes

But at some point, the tutus hit their limit. Principal dancer Megan Fairchild has been dancing the Sugarplum Fairy role since 2003, but the role’s demanding choreography, lifts and resulting sweat had left her costume yellowed and deflated. This year, the costume shop crafted a new bodice for her pink costume — one of their many tasks this year to update the production.

But for Happel, the effort is worthwhile: “One of the things that makes ‘Nutcracker’ so special for people is that when the curtain opens it’s just such an eyeful of choreography, design and characters that in some ways makes our audiences realize what the season is all about. Even for people who don’t have children, it makes them realize the child that’s inside of them and brings that out.”