The new space sells mainly accessories and is aimed at attracting a new generation of customers. 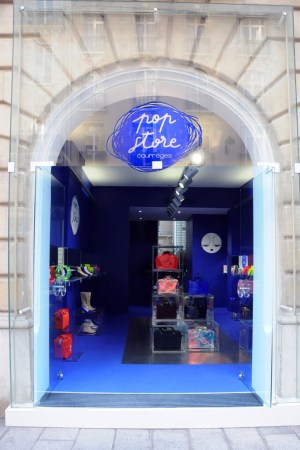 POP STAR: Courrèges on Tuesday feted the opening of its Pop Store, a concept aimed at attracting a new generation of customers to the Space Age brand.

Located next to the label’s historic flagship on Rue François 1er in the tony Golden Triangle of Paris, the 430-square-foot unit sells mainly accessories, with products ranging from a notebook costing 15 euros, or $19 at current exchange, to booties with a Plexiglas heel that retail for 620 euros, or $785.

“We want to say that we are the coolest of the luxury brands, no doubt because of our origins,” said Frédéric Torloting, co-owner and co-president of the label with Jacques Bungert.

“The brand was born in the Sixties and at the time, fashion designers were trying to change the world. They did not make luxury items destined only for the happy few who had the means to enter their stores,” he added.

To mark the relaunch of the Courrèges in Blue fragrance, walls have been painted a vivid blue, with products displayed on mobile Plexiglas shelves. “The idea is that the space will constantly change,” Torloting said.

The store will carry limited-edition products in addition to collaborations — such as an upcoming bag line produced with Eastpak — and selected items from the spring collection. “We think there are things to be reinvented in terms of the model and pace of distribution,” explained Bungert.

Courrèges will also open a pop-up store this month near the Hermès boutique on Rue de Sèvres on the Left Bank. In order to finance further retail expansion, Torloting and Bungert, who bought the brand in 2011, are in talks to sell a minority stake.

“We are talking to all sorts of funds from Europe, Asia and the United States,” said Torloting. “This brand obviously interests a lot of people.”