To celebrate 10 years of underwriting the CFDA Fashion Awards, Swarovski has tapped Philip Crangi to create a special 10-piece collection. 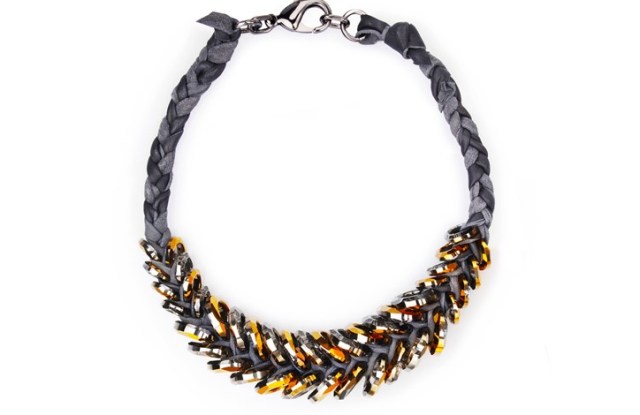 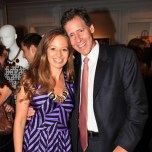 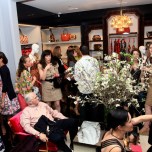 CRANGI’S SWAROVSKI RETURN: To celebrate 10 years of underwriting the CFDA Fashion Awards, Swarovski has called upon a former recipient for a favor — or an honor, depending on how you look at it.

Philip Crangi, who won the award in 2008, has teamed with Atelier Swarovski to create a special 10-piece collection. Consisting of two necklaces and three bracelets in two colorways — a petrol gray and a peach-gold — the lineup combines Crangi’s signature use of intertwined leather straps and Swarovski Elements woven together for a braided effect.

This story first appeared in the May 23, 2011 issue of WWD. Subscribe Today.

“I was really flattered that Swarovski asked me to collaborate on this project, out of all the great talents that have won a Swarovski/CFDA Award in the past 10 years — it was a great challenge and I’m really happy I was a part of it,” said Crangi.

The company will host events in Chicago on Tuesday and in New York on Thursday, with an in-store appearance by the designer.

WOMAN’S WORLD: Three years ago, Gucci and the Tribeca Film Institute formed the Gucci Tribeca Documentary Fund, aimed at helping independent filmmakers with finishing funds and postproduction guidance. Now the luxury goods house has joined forces with PPR’s Corporate Foundation for Women’s Dignity and Rights to launch the Spotlighting Women Documentary Award for films that focus on remarkable stories involving women and women’s issues. The latter is part of the Gucci Tribeca Documentary Fund and will bring an extra $50,000 prize to film projects that highlight the courage, compassion and contributions of women from around the world.

“This award dedicated to films about women is a wonderful opportunity to raise awareness about women’s issues such as violence, rights and empowerment to a large audience,” said François-Henri Pinault, chairman of the PPR Corporate Foundation for Women’s Dignity and Rights.

SIMPSON AND SNOOPY: Crowds peered into the windows of the Animazing Gallery in New York’s SoHo on Saturday evening to catch a glimpse of Jessica Simpson and fiancé Eric Johnson, who were there to support the art opening of their friend, Tom Everhart. The artist incorporates the characters of Peanuts into his colorful canvases and is the only person permitted to do so via an agreement with the late Charles Schulz, creator of the comic strip. “His artwork is unbelievable. It’s really incredible to see someone love what they do and bring brightness and color to it,” said Simpson, who denied a report that she and Johnson had settled on Hawaii for their upcoming nuptials.

“It’s up in the air. It has to be the right place and we’re scoping out a lot of places. We’re coming up with lots of great ideas that haven’t been done before between the two of us,” she said. Simpson was decked out in a bejeweled Isabel Marant jacket, J Brand shorts and Yves Saint Laurent heels — but not a stitch of her own lines, although she is slated for a full calendar of meetings this week to work on upcoming collections.

Also on hand at the opening were Iconix Brand Group chairman and ceo Neil Cole and chief marketing officer Dari Marder, who were there to check out the artwork starring their recent purchase. Last year, the brand management firm acquired the characters from E.W Scripps Co. for $175 million, with the Schulz family retaining a 20 percent interest.

MILLY’S MOMENT: There was a sea of Milly dresses at Thursday’s party to celebrate the opening of the label’s first store, at 900 Madison Avenue and 73rd Street. With so many guests and staff wearing the brand’s feminine-retro-preppy designs, it looked like a sorority meeting for the girls with good taste. “It’s amazing,” said Michelle Smith, Milly’s designer, who wore her own Caroline maxidress in a purple and black herringbone print. “We reached our monthly plan in the first five days.”

Smith and her husband, Andy Oshrin, Milly’s chief executive officer, chose the location for its retail attributes as well as its convenience — the couple lives just a few blocks away. Smith said several styles had already sold out, including the Slim Haley, a white linen dress with cap sleeves and a V-shaped cutout at the neck. Smith, who is on the board of Playground Partners, a committee of the Central Park Conservancy, donated a portion of the evening’s sales to the organization.

SHOP BOP: The Prada boutique on Madison Avenue was a riot of summery color on Thursday night at a cocktail reception celebrating the New Yorkers for Children 2011 Fall Gala. Vanessa and Henry Cornell, Kevin and Erika Liles, Alexandra Lebenthal, Allison Aston and Marisa Noel Brown were on hand, and Julie Macklowe wore one of Prada’s coveted neon-striped fur stoles over her striped dress, giggling and posing for photographers by an identically draped mannequin. Carol Alt mugged for photographers with Selita Ebanks, Hilary Rhoda and Shirin von Wulffen, who was shortly joined by her husband, Frédéric Fekkai. “Not a bad-looking crowd,” he laughed.

Euan and Lucy Sykes Rellie greeted Charlotte Sarkozy and Lara Meiland Shaw, while Harry and Jill Kargman admitted they could only stay for a few minutes. “We have half an hour until our babysitter turns into a pumpkin. And by pumpkin I mean a [word unprintable in WWD]….” Jill Kargman laughed. Bode Miller also did the rounds, later posing with Bryanboy, who kept his sunglasses on while greeting Nicholas Scoppetta.

FIRST-NAME BASIS: Balmain has confirmed details about its new ready-to-wear collection to be produced under license by Italy’s Ittierre SpA. Dubbed Pierre Balmain, it will be for women and men and under the purview of a separate design studio, overseen by the Paris-based house. (The company recently named Olivier Rousteing the new designer of first lines, labeled Balmain.) An official launch presentation for Pierre Balmain is expected in September, possibly in New York. WWD first reported a deal between the two parties on April 5.

HONORS NIGHT: Rick Darling, president of LF USA, and Jill Granoff, former president of Kenneth Cole Productions, will be given Visionary Awards at The Fashion Ball: Dining in the Dark on May 25 at the Ritz-Carlton Battery Park. Sponsored by The Foundation Fighting Blindness, the evening takes guests on a journey of taste, smell, sound and touch — all in the dark. For about 30 minutes, guests will eat their entrées using only these senses, to get a glimpse into the lives of the blind.

NOT BY THE BOOK: Entrepreneur, winemaker and now writer: Diesel chief Renzo Rosso presented his book, “Be Stupid for Successful Living,” published by Rizzoli, at Milan’s Bocconi University on Tuesday. Students cheered and clapped for Rosso as he talked about his “stupid” steps throughout his career, from his breeding rabbits as a young boy, to selling aged and torn jeans in his first New York store opposite a Levi’s banner, to building his Only the Brave holding with designer brands. “Be Stupid means doing all that reasonable people tell you not to do: to be bold, to dare, to break the rules, follow your instincts and your heart,” said Rosso, who centered a successful advertising campaign for Diesel on this concept, launched last year. “Be Stupid” will be translated in English in September. On the sidelines of the conference, Rosso said he is also thinking ahead and hinted at a possible listing on the stock exchange in the future. “We’ll get there in a few years,” he noted.

VIP ROOM: Ben Sherman kicked off its Very Important Plectrums charity initiative with Lifebeat in New York with a performance by Talib Kweli and a DJ set by Josh Madden at the Gramercy Theatre on Wednesday. A slew of musicians are taking part in the VIP program, donating signed plectrums — or guitar picks, which is also Ben Sherman’s logo — along with personal notes and framed photos, with each package set to be auctioned on eBay from May 29 to June 19. Participants include Coldplay, Depeche Mode, Duran Duran, Emmylou Harris, James Blunt, Keith Richards, Mark Ronson, Panic at the Disco and Ronnie Wood, among others. All proceeds will go to Lifebeat’s music industry HIV/AIDS programs.

FRENCH MAN: Having worked his magic reviving Carven’s women’s line, Guillaume Henry is set to take on designing the house’s men’s wear line, according to sources. Ludovic Alban, who was tapped as creative director of the men’s wear line in 2009, has since parted ways with the company.

WINDOW SHOPPING: Place Vendôme jeweler Mauboussin has taken an unusual approach to advertising its baubles. The brand will exhibit replicas of jewelry in the glass windows at bus stops across Paris. Mauboussin — known for such unconventional marketing as putting prices on ads — will also take a stand at Paris’ contemporary art fair FIAC at the end of October.

HARRODS GOES MOBILE: Harrods has launched its own iPhone app. The free app includes features such as an interactive store guide that uses GPS, so customers can locate where they’re standing in the vast store. The content also includes a guide to Harrods’ history, menus for all of the store’s 29 restaurants and a link to Harrods’ Twitter feed. Mark Briggs, the store image director, said: “We are continuously aiming to offer our customers the optimum level of service through use of new technology. With its useful tools and services, the Harrods app is set to become a vital part of the shopping experience at the store.”