Creatures of the Wind Fly to London for Resort 2017 Collection

By Lorelei Marfil and Samantha Conti on June 29, 2016
View Slideshow 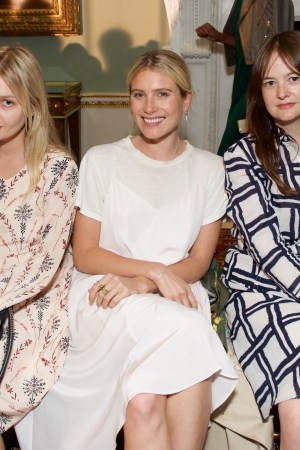 WINDRUSH: It was a big British moment for Creatures of the Wind designers Shane Gabier and Christopher Peters, who landed in London this week for their first runway resort show, in partnership with Farfetch.com.

For fall they’ll be making their debut at Browns, which is owned by Farfetch, as they begin a push into markets outside the U.S. Next up, they’ll be looking to expand into territories such as Australia and the South Pacific.

“We’ve always felt something of a kinship with London, and when we were here for our press day in February, we fell in love with it again,” said Gabier, adding that he and Peters would be meeting with Browns sales staff later this week.

Asked about the timing of the show, as London absorbs the shock of the country’s vote to exit the European Union, Peters said: “The benefit of working in fashion is that it allows you to celebrate beauty, and beauty gives hope, it revitalizes you.”

During their stay, the designers were also eager to enjoy some unstructured time in London. “We left it a little bit open,” Gabier said. “It’s always really nice to have a day or two when you actually don’t have a plan. We have lots of stuff we want to do, but we just do what happens.”

Peters added: “I need to go to the Victoria and Albert, I haven’t been.”

From her front-row seat at the duo’s show at Spencer House on Wednesday night, model Dree Hemingway called the designers her two favorite people. “I love them more than anything,” Hemingway said. “I’ve known them since they first moved to New York, and I’m really proud of them. It’s exciting that they are in London.”

Hemingway was in London to celebrate her godson’s second birthday and is planning a trip to Italy later this summer to visit her father. Asked about Britain’s Brexit vote, she said: “I think it’s a worryingly huge deal, and I don’t think that anybody foresaw the downward spiral that was happening — that is happening.”