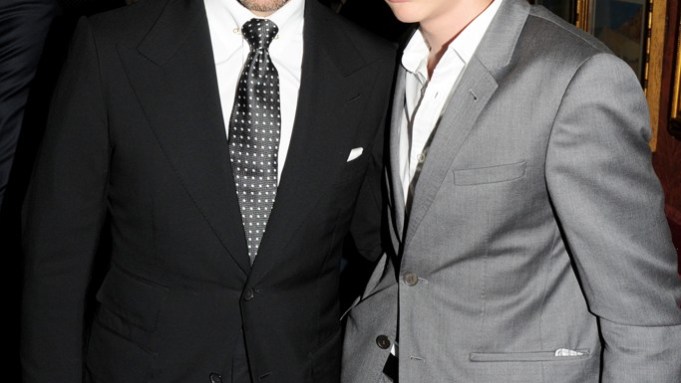 “I don’t know anything about the fashion world. It’s very mysterious to me,” said Colin Firth. “I only know Tom as a director. But when I say that, I mean one of the very best directors I’ve ever worked with. I mean, we’re all begging him to make another [film], but I don’t have any insider info on that count, I’m afraid.”

Spiteri said: “He made me all my leather suits for my Elvis video, while he was at Gucci. It is handy to have these friends in high places when a girl needs an outfit making. We go back a long way and he’s supported me in many projects I’ve been involved in.”

Ford was buzzing — and not just because of his upcoming collection of luxury skin care. “I’ve been living in London since 1997, so I’ve seen it all. But I do agree that the men’s collections here are stronger this season than ever seen before so, yes, there may well be something to get excited about after all.”

The new grooming collection, Tom Ford for Men, will launch in the fall and features nine multifunctional skin-care and grooming products, including a face cleanser, moisturizer, eye treatment, purifying mud mask, concealer and bronzing gel. Ford also plans to add two new fragrances to his Private Blend collection, which will launch along with the grooming line.