The brand replaces Adidas as the official outfitter for the country's Olympic and Paralympic Games in Russia in February. 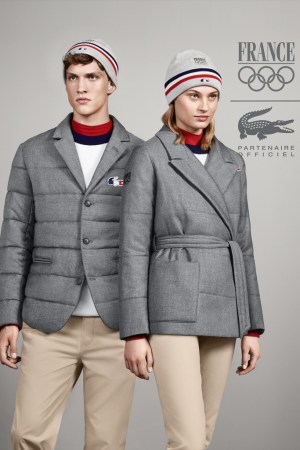 CROCODILE ROCK: The Lacoste crocodile logo will make his way onto Team France’s outfits at the Olympic and Paralympic Games in Sochi, Russia, in February. The Lacoste brand replaces Adidas as the official outfitter for the French Olympic team.

The brand presented the eight outfits it designed for the French athletes during a press conference held by the French National Olympic Committee on Monday in Paris.

Lacoste’s collaboration with the committee extends through 2016, which includes the games in Rio de Janeiro that year.

“Lacoste was the outfitter for the French ski team in 1968, but this is the first time we are official partner of the entire French delegation,” Lacoste chief executive José Luis Duran told WWD. “We will have a great visibility.” For example, French athletes are to wear the outfits during opening ceremonies and for medal presentations.

He added that the brand’s values, as well as its French origins, make it a legitimate partner. “The Olympic [Games] collection was designed in our design studio in Paris and is mainly manufactured in our factory in Troyes [France],” he said.

Duran said about 20 percent of the brand’s budget is allocated to sports events. “The budget hasn’t increased. We are allocating it differently, focusing on tennis, golf and the Olympics.”

The Olympics collection consists of eight outfits for women and men: two ceremonial outfits, two official outfits and four village outfits. Most of the Olympics products for men will be available in Lacoste boutiques in France this fall with prices ranging from 50 euros, or $68 at current exchange for a pair of gloves, to 220 euros, or $298 for a sweater. A shop-in-shop dedicated to the Olympics references will be installed in the Champs-Élysées flagship as well as windows dedicated to it.