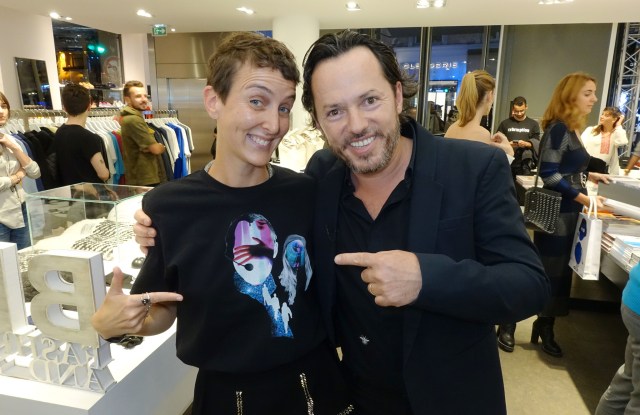 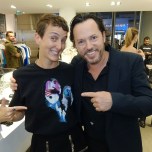 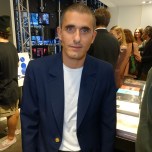 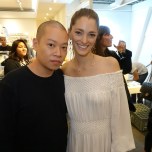 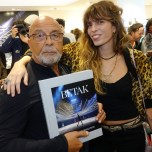 THE SHOW MUST GO ON: It was Alexandre de Betak’s turn to take the limelight Wednesday evening as guests such as Jean-Baptiste Mondino, Lou Doillon, Jason Wu and Felipe Oliveira Baptista queued patiently at Colette for the star fashion show producer to sign copies of a book – his first – charting his nearly three decades in the industry.

“It’s really good to be recognized for the work rather than anything else, that’s what it’s really about,” said de Betak in a brief aside between signing copies of the tome, “Betak: Fashion Show Revolution,” and embracing friends.

He has also staged a window installation at Colette featuring scenes from fashion shows and video displays, and customized “fashion week survival” products are on sale at the store.

Sofia Sanchez de Betak, chatting with guests in the background and sipping a ginger shot specially concocted by Maisie Café for the occasion, was happy for her husband to be the center of attention. “Obviously I know everything he has done, and I’ve worked a lot on the process of the book but seeing it all together is overwhelming, and I realized again how major he is. He’s not just the guy sleeping next to me every night,” she said.

After her own book launch earlier this year, Sanchez de Betak also has another personal project in the works – she is six months pregnant with their first baby. “It’s a girl,” she revealed, hugging her belly.

Towards the end of the line, Doillon explained, “Alex is a friend and he came to my book signing three days ago, so I’m here to support him.” She pointed out a book of her illustrations published by Astier de Villatte in a glass display case on the counter beside her.

The model, actress and singer will be performing a concert in Paris next week before heading for a date in Sheffield, in the north of England, later next month. “Richard Hawley, who was the guitarist in Pulp, has invited me to come and play with him,” she said.

The trip will also be an opportunity for a trip down memory lane. “I’m going to go through Nottingham, because my mother comes from Nottingham, so I’m going to go and visit very old tombstones and graveyards and go back in the steps of my great-grandparents,” she said.

Mondino was also keen to invoke spirits departed. “I’m doing a video with Prince in two weeks time,” he said with a serious air. “Prince is not dead, it’s as simple as that. He’s alive. He’s working on a new album, it’s called ‘Resurrection.’”

Jason Wu, newly arrived in town with his husband Gustavo Rangel, said he had known de Betak for more than a decade, and wanted to show his support. Further plans for the week ahead include a dinner Thursday evening hosted by Nadja Swarovski to celebrate his birthday. “It’s actually my birthday today, but I moved my dinner to tomorrow for Alex; we can’t be competing with each other,” he explained.

Caroline de Maigret, chatting with Byredo’s Ben Gorham, said she and de Betak had been working together for more than 20 years. “He’s family, I’m the godmother of one of his sons, Aidyn,” she said. “For me, he’s always in the limelight. I look up to him.”

Metaphorically, that is; in stature, she towers above him. As does Gorham – which de Betak proved by standing on a chair to be photographed with the perfumer.

Other guests included Vincent Darré, Elie Top, Martine Sitbon and Loïc Prigent, who was taking the opportunity to browse Colette’s magazine racks at the back of the store.

“We have to take advantage of Colette while it’s still here,” said the fashion filmmaker. “I have a lot of books from Colette and sometimes I buy stuff from the gallery upstairs, there’s some great stuff, and often it’s not so expensive, sometimes less so than the clothes. I also have lots of t-shirts,” he continued. “I have a good Colette archive at home. Colette is my Monoprix.”

Later in the evening, guests headed to de Betak’s Paris home on the Left Bank of the Seine for celebratory drinks and dinner.