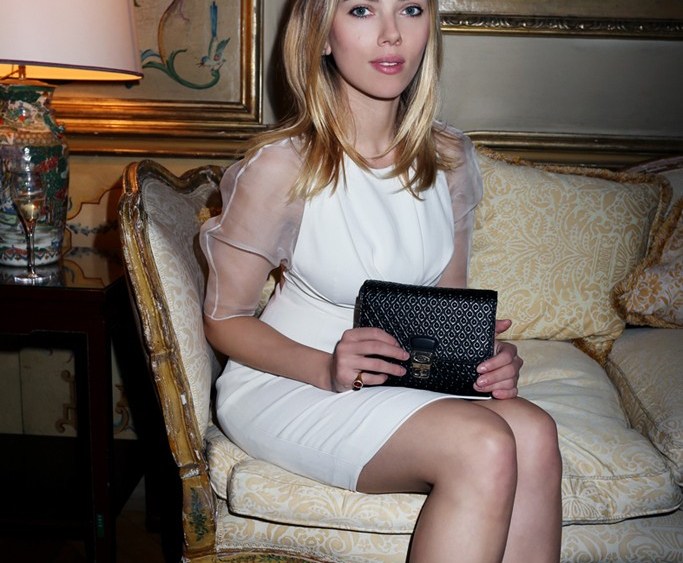 CURVE AHEAD: Scarlett Johansson took time out from memorizing her lines for her January Broadway debut in “Cat on a Hot Tin Roof” to attend a Tod’s event in Paris. “That’s pretty all-encompassing, and it’s pretty much taken all my brain space,” the actress said of her rehearsals. Other than two new films coming out later this year, she also acted in Joseph Gordon-Levitt’s directing debut film, which has yet to be titled.

Tod’s presented its new Signature bag collection in the Italian Embassy on Monday evening to guests including Elettra Wiedemann and Jessica Stam. Johansson studied the new collection of clutches and handbags in pale metallic and warm Caribbean colors, and asked questions about the architecture of the building.

Finding the right fashion fit wasn’t always easy for Johansson, who was wearing a Dior cocktail dress and Roger Vivier heels. “I think every girl has their difficult part of their body that’s difficult to dress,” she said. “For me it’s always been about being petite and curvy. There are certain styles I’d love to wear, but I just have to come to terms with the fact that I just don’t look good in like a sack dress, it’s just not going to happen.…As you get older you learn more about your body and what looks good on you. It’s weird for me, because I’ve been photographed for so long…and sometimes you look back at those red-carpet pictures, and you’re like, ‘What was I thinking?’ I think everyone has that, maybe not on that scale…but everybody has their shameful red-carpet moment.”

Stam has a new reporting gig for an online fashion talk show on Yahoo’s Shine network, called “The Thread.” “I do really like the interviewing — what you’re doing!” she said. “I like the part about getting to know people, and the fact that I can ask — to a degree — exactly what they’re up to.”