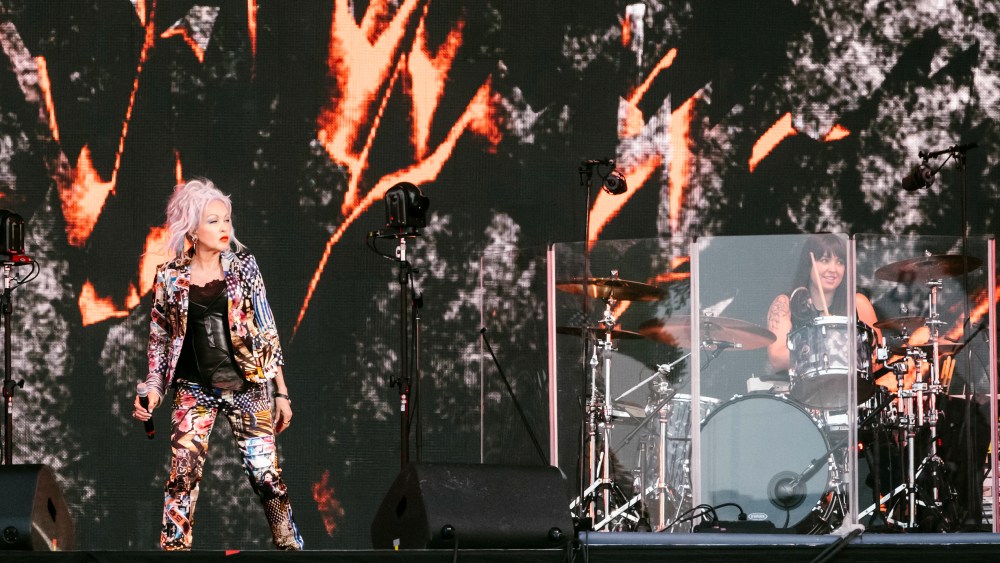 TRUE COLORS: If the graphic jackets and pantsuits that Cyndi Lauper has been sporting on her summer tour with Rod Stewart look familiar, it’s because they’re all current Libertine designs. The pop star bought her own jackets at Libertine’s shop-in-shop at Fred Segal’s Sunset Boulevard flagship, then visited designer Johnson Hartig’s Hollywood atelier for more.

“She was shopping at Fred Segal and fell in love with our shop-in-shop there. Then she contacted us directly and came into the studio,” said Hartig. In the studio, Lauper chose more pieces to wear on tour. “It was all current stock, we didn’t have to create any pieces because we had them all here,” Hartig said.

To see Lauper’s style over the years, click here.

For her opening act, Lauper sports a pantsuit with allover holographic sequins. “Don’t you love what happens when I rub myself? The colors change,” she said at the tour’s kick-off June 25 at the Hollywood Bowl. She then climbed onto a speaker in the crowd, teetering in sequined platform boots, to sing “Money Changes Everything.”

For her Eighties anthem “Girls Just Wanna Have Fun,” Lauper changed into another pantsuit, covered in a patchwork of mixed prints.

She’s billed as the “special guest” opening for British national Rod Stewart, but Lauper later returns to the stage to sing a duet with him, wearing a Libertine Union Jack jacket. “I chose it just for Rod,” she said backstage after the performance. “It was incredible getting to sing with him.”

After nearly 40 years as a pop star, Lauper is staying busy. This year marks the 10-year anniversary of the True Colors Fund, which indexes all 50 states and the District of Columbia for their effectiveness in addressing youth homelessness, particularly among LBGTQ youth. She is also working on the score for the Broadway adaptation of “Working Girl.” Her score for the Great White Way’s “Kinky Boots” earned her a Tony Award in 2013, making her the first solo woman to receive the award.

As for her designer wardrobe – Lauper herself has a line for HSN – she said, “I just love his things. They fit me perfectly.” She’ll be wearing them when she performs at Madison Square Garden on Aug. 7, and until the tour concludes Sept. 1 in Seattle.

Said Hartig, whose clothes are part of the Los Angeles County Museum of Art’s permanent collection, “I’ve been a fan since 1981. Since we’ve met we’ve formed a mutual admiration fanclub. I don’t ever hear ‘True Colors’ when it doesn’t take me back to a time when I was very young. Her music feels so nostalgic and modern at the same time.”