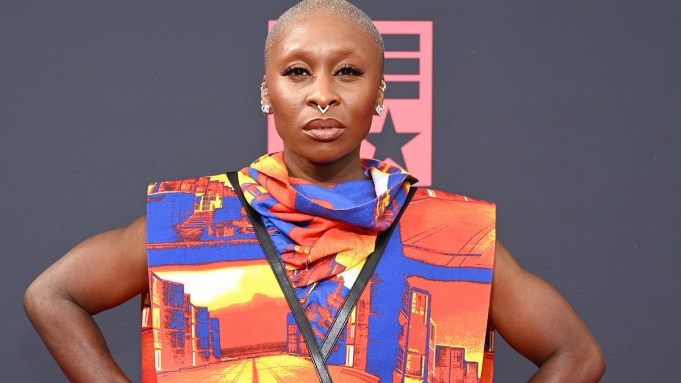 Cynthia Erivo embraced saturated primary colors and architectural inspiration for her latest red carpet look. To attend the 2022 BET Awards on Sunday in Los Angeles, the 35-year-old English actress and singer pulled a vibrant outfit off the Louis Vuitton runway, choosing to stand out while celebrating Black excellence and culture.

Erivo — who was styled by Jason Bolden — wore a two-piece Louis Vuitton look featuring a red, yellow and blue cityscape print. The structured envelope-style top featured black trim with a draped modern cowl neck, while the mid-thigh flounce skirt had  drooping pockets and layering detail. Erivo accentuated the waist with a black grommet leather belt, which hung down the right side. The multi-hyphenate star, who is set to play Elphaba in the upcoming two-part film adaptation of the Broadway show “Wicked,” wore 6-inch gold metallic platform heels.

The BET Awards celebrate the achievements of musicians, actors, athletes and more throughout various entertainment fields. The first BET Awards took place in 2001 to celebrate Black culture and Black excellence. Taraji P. Henson is the host of this year’s show with performances by Lizzo, Latto and Jack Harlow. Leading nominations include Doja Cat with six nods, and Ari Lennox and Drake with four nods each.