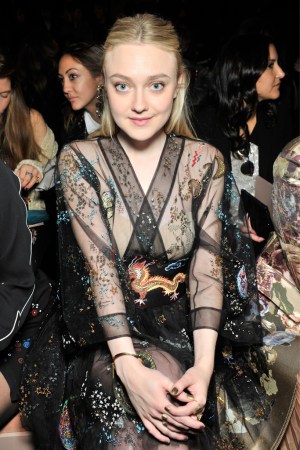 ROLE MODELS: Dakota Fanning, sitting front row at Valentino in a kimono-fronted embellished cocktail dress from the label, was happy to gush about Ewan McGregor, with whom she recently worked on “American Pastoral,” the Scotsman’s directorial debut. It’s due out later this year.

“He’s wonderful, we became very good friends,” she said. “I play Ewan’s daughter in the film, which is based on a Philip Roth novel. It was an amazing experience.”

The Valentino show was a chance to catch up for Australian actresses Abbey Lee Kershaw and Courtney Eaton, who starred together in “Mad Max: Fury Road.”

Kershaw is set to shoot an adaptation of Stephen King’s “The Dark Tower,” directed by Nikolaj Arcel, in Cape Town later in the year alongside Matthew McConaughey and Idris Elba.

“I’m not human, I’m reptilian,” she said of her character.

Life has changed significantly for the former model since her “Mad Max” role. “I finally love what I do,” she said. “Now I’m fulfilled that I’m making art, not just being a part of it. I’m learning fast, and it finally feels like my brain’s expanding.”

Eaton, meanwhile, who is based in Los Angeles, could not confirm any specific future projects. She admitted: “I’ve been extremely lucky and lots of opportunities have come up.”

Karen Elson, Aymeline Valade and Mélanie Thierry were also among the front-row guests.