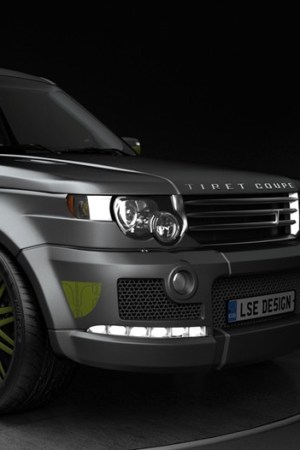 SPEED DAMON: Tiret, the over-the-top luxury diamond watch firm cofounded by Damon Dash and Daniel Lazar hasn’t compromised on its aesthetic due to the rough economy. So much so that the firm continues to push the limits on just how far it can go. At Baselworld, the watch trade fair that’s taking place this week in Switzerland, the brand debuted its first car. Marek Djordjevic, the designer of Rolls-Royce’s Phantom and Drophead models, has created a Range Rover coupe under LSE Design in the U.K. The modification of the five-door sport utility vehicle starts at approximately $279,000 and climbs to $716,000, depending on different options such as a diamond-encrusted dial set on the dashboard and a panoramic roof, and armoring. “Tiret is all about customization, uniqueness, luxury and exclusivity,” said Lazar, who mentioned he received two requests already. “This car is limited for very limited clientele, and we don’t expect to sell more than a handful a year.” As for the target demographic: “Someone with a unique and luxurious lifestyle,” added Lazar.

QUE LINDA: Linda Fargo has unexpectedly become a muse. When Fargo, Bergdorf Goodman’s senior vice president, fashion office and store presentation, debuted her new double pocket matte black crocodile tote by Nancy Gonzalez at the fall collections throughout New York, Milan and Paris she caused a stir. “Everyone started calling me from Europe asking for the ‘Linda’ bag,” said Gonzalez president Santiago Gonzalez, who does not name bags, but decided to go along with it as well as make the bag exclusive to Bergdorf Goodman. On Friday from 2 to 4 p.m., designer Nancy Gonzalez will be at the store to help customers order Linda bags in myriad skins and colors. Prices range from $2,950 to $5,000. Fargo is more than flattered by the attention. “Getting asked to have a bag like this keeper named after you in perpetuity is like getting asked for your hand in marriage,” Fargo said. “It’s flattering and it’s hopefully, forever.”

ROADBLOCK: As tensions mount among disgruntled workers in France, François-Henri Pinault, chairman and chief executive officer of PPR, was blocked in his taxi in western Paris for a bit less than an hour on Tuesday evening by around 50 employees from the group’s Fnac and Conforama units. He was then freed by police, a PPR spokeswoman confirmed. The event occurred following a meeting between Pinault and PPR’s European worker’s council. “These were representatives who had attended and been listened to during the meeting,” said the spokeswoman. In late February, PPR revealed plans to trim the workforce at its Conforama and Fnac chains — by around 800 and 400 jobs, respectively — amid a deteriorating consumer environment. There have been a spate of similar incidents across France in the recent past. Also on Tuesday, for instance, four directors of Caterpillar’s French arm were reported to have been blocked by employees demanding improved layoff conditions. Meanwhile, in mid-March, the director of Sony France and three Japanese executives were reported to have been held hostage for 24 hours by workers from a factory due to be closed in southwestern France.

OSCAR THE JUDGE: Mango, the Spanish specialty chain, has tapped Oscar de La Renta to head a jury of retail and design-school heavyweights to pick the winner of El Botón (The Button) — Mango Fashion Awards. The second international newcomer competition, established in 2007, is open to designers age 35 and under who have produced a minimum of two collections. Prize winnings will total 300,000 euros, or $399,239 at current exchange. The winner will be revealed April 29 during a runway presentation in Barcelona.

FEDERAL EXCESS: Karl Lagerfeld is getting in touch with his rural side. The designer just returned to Paris from Vermont, where he shot Chanel’s fall-winter campaign with models Heidi Mount and Freja Beha Erichsen. “It was very cold, the sky was blue and the light was stunning. And the people are so nice,” Lagerfeld said Monday night at the opening of the “Court Pomp & Royal Ceremony” exhibition at Versailles. The backdrops for the shoot included a big wooden barn. “I’ve never seen such a beautiful barn in my life,” he enthused. Meanwhile, Lagerfeld marveled at the magnificent embroideries on display at Versailles from royal wardrobes from Germany, Austria, Russia, Sweden and Denmark. He noted they were all realized in France. “And it was not like shipping today. There was no DHL,” he said.

TAHARI’S TV BLITZ: Elie Tahari must be having some particularly good television karma. The label has been making quite the network rounds this season: Calista Flockhart wore Tahari’s bright yellow “Aimee” sleeve blouse with bows on a recent episode of “Brother & Sisters,” and Blake Lively wore the same top on “Gossip Girl” Monday night. The piece is said to have subsequently sold out of the designer’s SoHo boutique.

Earlier in the season, Vanessa Williams sported at least three Tahari outfits on “Ugly Betty;” Marcia Cross wore a green top on an episode of “Desperate Housewives,” and Kim Raver of “Lipstick Jungle” wore the designer’s “Jordana” sheath dress on a recent episode. But the ultimate client endorsement could soon be on its way courtesy of Joan and Melissa Rivers, the mother-and-daughter team that never met a plastic surgeon they didn’t like. Rumor has it they stopped by the SoHo boutique recently and picked up pieces for upcoming episodes of “The Celebrity Apprentice.”