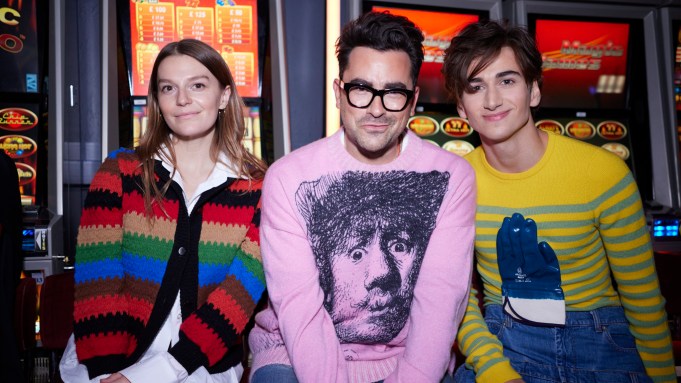 He had to put the brand on hold while filming the Canadian television sitcom, created by him and his father Eugene Levy. But as the show wrapped up in 2020, he is ready to pursue his fashion passion once again.

Levy tapped Elena Doukas, who was previously the design director at Garrett Leight California Optical for 11 years, as co-creative director and president last year to help run the brand.

On Saturday afternoon, D.L. Eyewear unveiled its first eyewear collaboration with this year’s LVMH Prize winner S.S. Daley during the brand’s spring 2023 fashion show, where Levy was in attendance, wearing an oversize green trenchcoat with drawings of water birds from the brand’s fall 2022 collection.

Later in the evening at the JW Anderson show, Levy opened up about why he chose to collaborate with S.S. Daley.

“This is a very special one because it involves a lot of people that I care a lot about,” said the star who will be starring in “The Idol,” an unscripted show coming to HBO Max this November.

Levy was also impressed with the fact that Jonathan Anderson decided to put on the show at the Las Vegas Arcade Soho right next to the brand’s store,

“It’s amazing. These slot machines work,” said Levy, who wore a pink sweater from JW Anderson with a Rembrandt drawing on the front.

It also appears that attending fashion shows is not the only reason why he is in London.

“I’m here working on something very fun and exciting, but I can’t speak very specifically about it. Fashion is involved but I wish I could tell you more,” Levy teased.