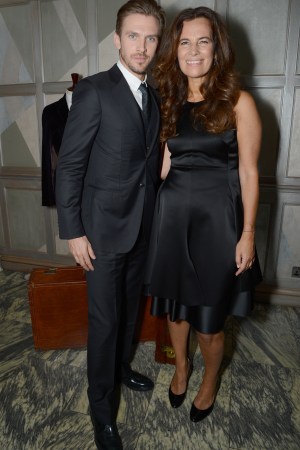 Beyoncé’s Second Ivy Park Collection Is More Size-Inclusive Than Ever, With Sizes Up to 4X

MEASURE FOR MEASURE: Given Giorgio Armani’s love of understatement, it was fitting that the party hosted by Roberta Armani and Dan Stevens to mark the actor’s new role as the face of Armani’s made-to-measure service was an intimate affair.

Dressed in a three-piece Armani suit, Stevens was deep in conversation with his former “Downton Abbey” co-star Allen Leech, Josh Hartnett and Henry Conway. The latter was dressed in vanilla tones with a big striped scarf thrown over his shoulders.

“I’ve got my Dame Judi Dench look on,” Conway said. “She loves a big statement ring and a wrap draped about the shoulders.”

Hartnett, meanwhile, had his arm around girlfriend Tamsin Egerton’s shoulders, and was conscientiously keeping an eye on the rebellious spaghetti straps of her lace Armani dress — and dutifully replacing them to vertical position when they slipped down.

Armani said Stevens “embodies the perfect British elegance and class, and being here tonight with him, in London, is a perfect way to celebrate the new campaign and the service we offer.”

In another room, a tailor’s shop had been set up — complete with pattern blocks, cloth samples and measuring tape-wielding models posing as tailors — to highlight Armani’s fully bespoke service, which is available exclusively at the Sloane Street boutique, with prices starting at 2,000 pounds, or $3,106 at current exchange.