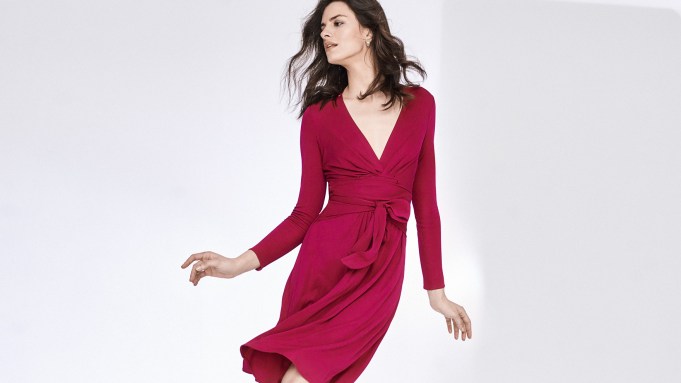 MY MONSOON: Former Issa London founder and creative director Daniella Issa Helayel is back in action, teaming with the British high street retailer Monsoon on a capsule range of dresses.

Known for her figure-flattering, brightly colored silk wrap dresses, Helayel made headlines around the world when the Duchess of Cambridge wore a royal blue Issa London design for her engagement announcement to Prince William in 2011.

The Daniella Helayel for Monsoon 15-piece range features Helayel’s signature ladylike designs. The collection includes 13 dresses — long and short — a shirt and trousers. Materials include silk chiffon, satin crepe and jersey, in a range of bold colors and floral and graphic prints.

Helayel called the Monsoon collaboration “a natural fit. It was close to my heart to celebrate femininity with an array of playful colors and an edited selection of luxurious materials and fine textures.” She said it merges “cool silhouettes with today’s zeitgeist of 24/7 eternal style and a zest of fun.”

Earlier this year, Brazilian-born Helayel created a line of dresses for the United Nations to celebrate the 20th anniversary of the U.N. Women’s Trust Fund, with half of the proceeds in aid of women. In 2013, Helayel was also part of a judging panel for the 2013 Dorchester Collection Fashion Prize for emerging talent alongside Stephen Jones, Stephen Webster, Caroline Issa, Rupert Sanderson and Nicholas Oakwell.

Helayel, who funded and started showing Issa during London Fashion Week in 2003, departed from the brand in 2013. Her departure came after Camilla Al Fayed, a daughter of Mohamed Al Fayed, the former owner of Harrods, took a 51 percent stake in a new company with the aim of developing the Issa brand globally. Helayel eventually left the company, which has since ceased operations.