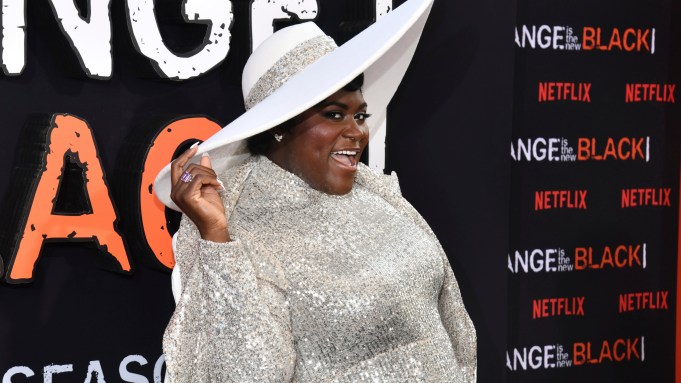 The actress arrived at the New York premiere for the final season of Netflix’s hit show, “Orange Is the New Black,” Thursday wearing a custom Christian Siriano silver sequin gown with a white blazer and matching oversize hat. Brooks was joined by Siriano on the red carpet, who helped adjust the gown’s train for her photo op, where she gladly cradled her baby bump for the photographers.

Siriano’s looks were also seen on a number of actresses at the premiere, including Laverne Cox in a tulle ballgown, Diane Guerrero in a pink tartan dress and Adrienne C. Moore in a cheetah print look.

The actresses joined their fellow castmates, including Taylor Schilling in an orange Monse dress, Laura Prepon in a Ralph Lauren suit, Uzo Aduba in a green SemSem dress and Natasha Lyonne in a white Gucci look. Lyonne took to her Instagram account to share photos from inside the premiere, captioning the post with “I’m gonna miss us. Thank you @gucci for keeping this farewell right and tight. End of an era.”

Click through the above gallery to see more red carpet photos from the “Orange Is the New Black” final season premiere.