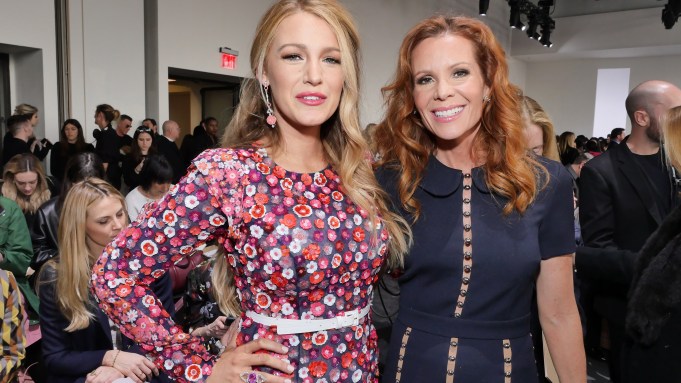 Patti Hansen identified herself as a fashion week rarity. “He’s the only one I come to,” she said of Kors. “If I come,” she said. “It’s been a few years. He’s just very wearable, sophisticated, sexy, feminine.”

While some of the younger girls had been to fittings for their Wednesday morning looks, Hansen took a more low-key approach. “I just went into his shop and I was like, ‘This is exactly what I wear every day’ — all black, and a little bit of gold,” she said. As for what she’s liked on the runway this season? “I’m the wrong person to ask.”

Qualley was fresh off of the front row at Philipp Plein’s extravaganza at the Public Library. “I thought it was so sick. Everything matters how you style it, and his was styled so well,” she said. “And I think it’s so fun to dress up wacky. I was wearing a matching leather biker jacket and skirt with flames on it.”

Qualley, the eldest daughter of Andie MacDowell, has been making the rounds this NYFW, which kept her busy through Valentine’s Day. “I was crazy busy yesterday, and ended up getting pulled into a Ralph Lauren fitting at like 8 o’clock, which interrupted Valentine’s Day,” she said. “But then we went and had a quick dinner and passed out. I usually stay at my friend’s place in Brooklyn but [my boyfriend] got us an Airbnb.”

Stallone has been enjoying the limelight since her turn as a Miss Golden Globe, shared with her sisters. And apparently fashion week is kept all in the family as well. “This is my first show at fashion week, but I’ve been running around with my older sister Sophia,” she said. “I’m following everything on social media, so I’ve been really involved. I’m going to Europe tomorrow — I’m going to shows, and I’m walking in a few — hopefully Topshop. I’m still waiting to hear back.” Should Topshop fall through, she has plenty of other hopes on her to-do list. “Go to dinner, go out…” And after collections? Back to school. “I’m trying to balance both, but it’s been a lot of fun,” she said.

Next to her was model Cami Morrone, who is rumored to be collaborating with major brands during the European collections, but, naturally, “I can’t talk about it.” She was, however, free to discuss her upcoming film, which she’s promoting dutifully in the front rows this season.

“I’m going to London in a couple hours. I’m going to be doing all the rounds — mostly sitting at a couple shows because I have a movie coming out this year,” she said. “It’s called ‘Death Wish,’ and it’s coming out in October. It’s the remake of the one in 1970. We shot for four months in Canada this year, and it was amazing.”