Both footballers have urged voters to support Britain staying in the European Union in Thursday's referendum. 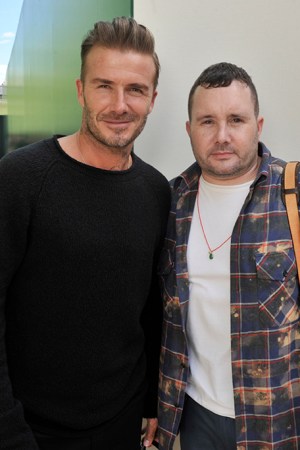 LONG DISTANCE RELATIONSHIP: As Britain went to the polls to vote on EU membership, former Manchester United teammates David Beckham and Rio Ferdinand — who both back the “Remain” camp — were in Paris for the Louis Vuitton men’s show on Thursday.

A phalanx of photographers descended on Beckham as he arrived flanked by fellow Brit Kate Moss, who was accompanied by her boyfriend, Nikolai von Bismarck. Asked if he would rush back to the U.K. cast his vote, Beckham said: “No, I already did.” Vuitton chairman and chief executive officer Michael Burke interjected: “He voted the right way.”

Beckham presumably voted by proxy, like Ferdinand, who shrugged off online criticism of his Facebook plea for people to take part in the historic referendum.

“That’s just the way it is. Everything that you do, there’s going to be a reaction — negative, positive. I’m not there to think about or comment on the reaction. I did it for a particular reason, which was to get people to vote — no particular way, just to vote,” he said.

Like Beckham, the retired footballer has a clothing line in the works. “That’s something in development at the moment,” Ferdinand said, adding that it should hit the market late this year or early next year.

Dwyane Wade is also cooking up a new collection to join his already extensive roster of products, which include socks, underwear, loungewear, ties and shoes. “I’m working on a nice, cool project right now that we can’t announce yet, but when we do, I’ll be happy about it,” the Miami Heat star said.

Among the other guests at the show, held in the gardens of the Palais-Royal on a rare sunny day in Paris, were Victor Cruz, Jing Bo Ran, Lara Stone, Nick Robinson, Ben Robson, Wu Xiubo, Jake Chapman, Paul Simonon and Michael Stipe, who sported a bushy gray beard.

“I’m like a kid in a candy store,” said Corey Hawkins, who was visiting Paris for the first time. The American actor wrapped filming on “Kong: Skull Island” in February and will be seen on television next year in “24: Legacy,” the reboot of the “24” franchise, in which he takes over the lead role from Kiefer Sutherland.

Initial response to the show’s trailer has been positive. “I mean, I kind of like being the underdog and doing the unexpected, and I think people have been really pleasantly surprised with it, so I’m super stoked for it and I think everybody’s going to be in for a treat,” Hawkins said.

Alan Cappelli Goetz no doubt felt sympathy for the models who had to walk in mohair sweaters in the boiling heat. The actor, who was born in Belgium and raised in Italy, piled on the layers for his role as a Roman general in the upcoming remake of “Ben-Hur.”

“I had this iron vest which was extremely, extremely heavy, completely covered by the over-dress, so it was in my point of view completely unnecessary,” he said.

“In the Fifties, the way they would realize those movies was actually more fake than the way we do it today. Today, with high-definition, every single detail needs to be believable. Back then, they could use cotton T-shirts and rubber. You had scenes where people are wearing watches, and it’s the Roman Empire.”