The style icon and soccer legend sat next to Kate Moss at the house’s high-energy fall men’s wear show. 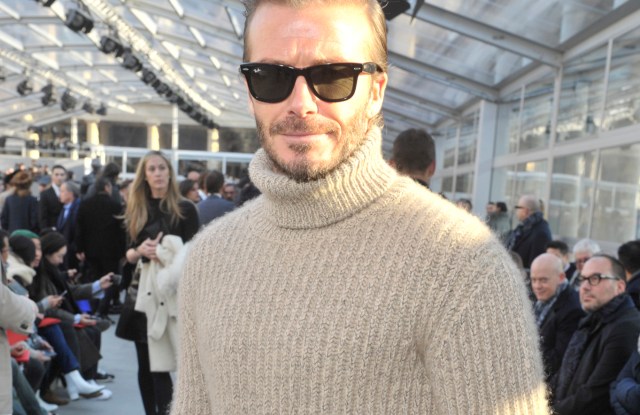 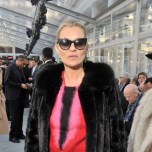 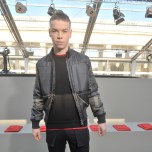 SUPREME COURT: Nobody was more excited about Louis Vuitton’s Supreme collaboration than the VIP front row guests at the house’s fall men’s wear show on Thursday, led by David Beckham. The style icon and soccer legend took in the collection alongside Kate Moss — she in black pointy booties and a red, pink, black and blue mohair sweater, shaking her head to the show’s thumping music; he in bright white sneakers that matched his teeth and a cozy oatmeal roll-neck.

“I’m here to support Kim [Jones], and the collaboration with Supreme is just incredible,” said Beckham, adding of the show’s homage to iconic New York artists: “I love everything about New York, there’s nothing I don’t like.” Apart from one of the city’s residents who’s due to soon fly the coop, perhaps? “No, no….nice to meet you,” he demurred when asked if he had a message for Donald Trump on the even of Inauguration Day.

“No, I don’t have anything to say to him,” echoed actor Will Poulter, who has just wrapped filming the Kathryn Bigelow-helmed “Untitled Detroit Project,” about the 1967 Detroit riots. Poulter, who plays the role of a policeman, said he connected with the Vuitton show’s urban attitude. “I’m a city boy through and through. Everything about New York screams a ‘go, go, go’ attitude — and I love that urban landscape.”

Also at the show were Lewis Hamilton, Chinese actor Mark Zhao and “Westworld” star James Marsden, who was paying close attention to the Supreme elements.

“I was not expecting that at all. I have spent the past two months searching for a Supreme gift for my son who is obsessed with those kinds of brands, and now to see them do this collaboration with Louis Vuitton was a very welcome surprise, although it’s going to take a large bite out my wallet,” said the actor, who confirmed he is lined up for Disney’s “Enchanted” sequel, though he’s yet to see the script.