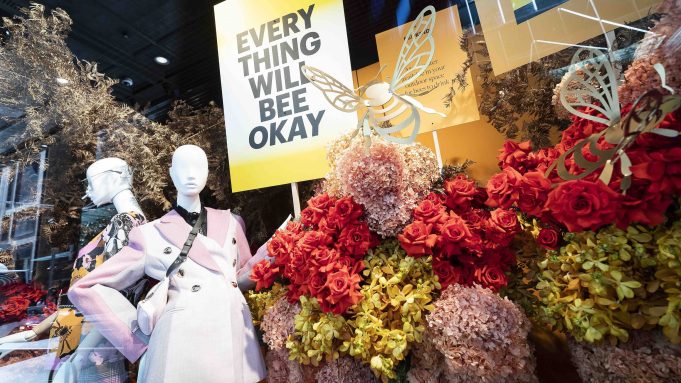 SYDNEY — The 35th annual Spring Flower Show at David Jones’ Elizabeth Street, Sydney flagship has an added buzz this year thanks to a bee theme.

Returning to Elizabeth Street for the first time since the completion on April 4 of the store’s 200 million Australian dollar, or $146 million, refurbishment, the show, which launches Tuesday and runs until Sept. 20, features 200,000 blooms displayed in the street level windows and on the ground floor and level seven shoe floor. It took a team of 15 florists and horticulturalists 4,000 hours to install, under the creative direction of George Low from Sydney-based Seed Flora.

But the real stars of the show are bees, with metal bee sculptures featuring throughout the installations, alongside educational materials on how to attract and nurture bees in the garden.

In partnership with Sydney-based beekeeping organization The Urban Beehive, moreover, David Jones has installed a permanent rooftop apiary over the store, with five hives housing about 400,000 bees, which were rescued from swarms across Sydney and the state of New South Wales.

Customers can book a complimentary guided tour of the show led by horticultural experts — with COVID-19 safety protocols in place.

Virtual tours of the show are being offered this year for the first time on the davidjones.com web site.

According to a trading update from South African-based parent company Woolworths Holdings, David Jones’ full-year sales are down 8 percent on 2019, due to the impact of COVID-19. Online sales doubled in the second half, contributing 18.4 percent of total sales.

“People have bought up,” Veals said. “They’ve not been traveling, so they’ve bought into luxury, they’ve invested in pieces that they probably may have spent on a holiday before.”

Across the entire business, activewear, accessories and footwear, notably slippers, have also performed extremely well during COVID-19, said Veals, who added she has sold “thousands” of pairs of a particular 59.95 Australian dollars, or $44, sheepskin slide from the Emu Australia brand.

“Activewear has certainly been from a womenswear perspective, the key category,” Veals said. “And the sneaker — designer sneakers. She may not be going anywhere but when she goes for a walk it’s in a pair of McQueens.”