The cross-country rollout of the penultimate “Twilight” movie made its way to New York on Wednesday night. 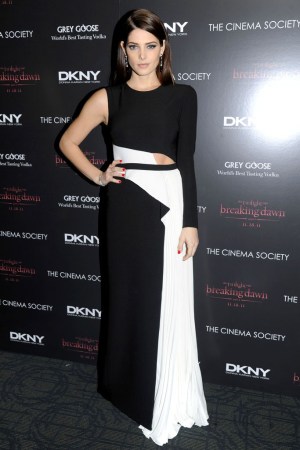 DAWN TIME: The cross-country rollout of the penultimate “Twilight” movie made its way to New York on Wednesday night, when the Cinema Society and DKNY hosted a screening of “The Twilight Saga: Breaking Dawn — Part 1” at the Landmark Sunshine Cinema. After the showing, the crowd moved to new Lower East Side restaurant Sons of Essex, where a phalanx of ear piece-sporting security guards patrolled the entrance of the saloonlike space, despite the fact that none of the film’s more-freak-out-inducing stars had made it. Peter Facinelli, Nikki Reed and Ashley Greene dutifully filled in for Robert Pattinson, et al.

“It’s been a crazy week, but it’s been exciting,” said Greene, who by then had changed out of her Donna Karan red-carpet gown for a pair of black pants and a leopard-print Giambattista Valli shirt. “I went to the premiere in L.A. and I saw half of the movie because I had to fly from L.A. to New York to get off the red eye and to go right to the ‘Pan-Am’ set — because I took the ‘Pan-Am’ gig right in the middle of the press tour. Then tonight, I walked the carpet, left, then changed and watched the rest of the movie in comfortable clothing.

“I’ve seen the whole film, yeah,” she assured with a laugh.