The company is set to debut a custom engagement ring service in all of its boutiques worldwide. 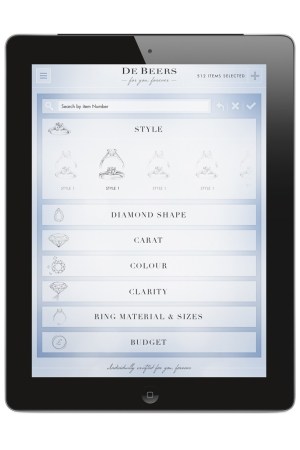 DE BEERS GOES BESPOKE: Fine jeweler De Beers is going custom. On Monday, the company will launch a bespoke engagement ring service in all of its boutiques worldwide. The service is based on an iPad app created by the firm, which it developed over a four-month period. “It’s been some late nights,” said global brand director Jennie Farmer, who explained that the service is free of charge and allows customers to build a ring from cut and clarity to setting.

The newly developed app, dubbed “De Beers Iris,” replicates differing light conditions, which illustrate the diamond’s cut via video. Normally, this process isn’t readily accessible to shoppers, but, according to Farmer, technological advancements have permitted the brand to record a video of the brilliance of different diamond cuts.

This story first appeared in the October 29, 2013 issue of WWD. Subscribe Today.

“We saw a trend in the market, that people wanted to customize their engagement rings,” she said. “I think what’s unique about what we’re doing is that you can see the Iris video, you can select some fancy cuts and there’s no starting price point. Anyone can come in.”

If successful, De Beers may extend the service to include other pieces of jewelry such as necklaces, Farmer said, adding, “We really want people to enjoy the process and learn about diamonds.”