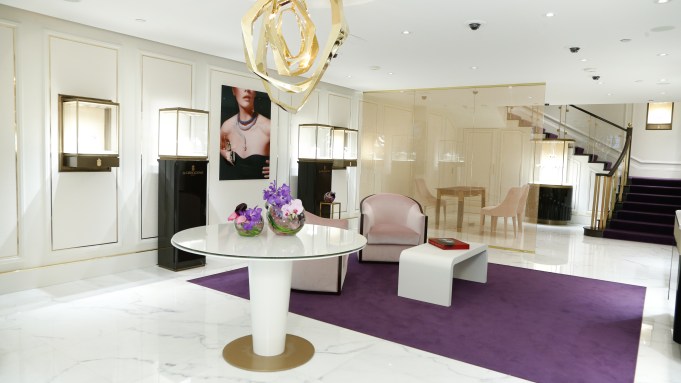 De Grisogono is raising the curtain on its partnership with DLK founders and former Leviev executives Lisa and David Klein.

The two entities look to match De Grisogono’s flair for color and unconventional designs with the Klein’s expertise in important gemstones, which they honed at Leviev. As such, the two parties have worked together on new designs to be sold internationally. Additionally, the Kleins have spearheaded a new De Grisogono store at 700 Madison Avenue from which they will direct the jeweler’s U.S. business. The boutique officially opened its doors on Monday.

David is to fulfill the role of De Grisogono’s U.S. chief executive officer, and Lisa its president. De Grisogono’s international operations will continue to be run out of Geneva, Switzerland.

In February WWD announced the partnership, which has seen the Kleins’ Leviev business cease operations in order to focus on De Grisogono’s U.S. business development. They have also been hard at work to lend their expertise in stones to De Grisogono creative director Fawaz Gruosi’s designs, which have been known to skew brash and over the top, often through a use of semiprecious stones instead of remarkable gems.

“Boldness, vibrancy and modernity are a part of the De Grisogono DNA but as you can see with these pieces there is now a focus on important diamonds as well. We are combining the two aspects — usually they are kept separate,” said Lisa.

“If you look, there are design houses and then there are stone houses but no one has truly brought both of these worlds together under one house. De Grisogono now is,” she added, perched inside a private sales salon at the new De Grisogono New York flagship. On the table were initial designs to result from the Klein-De Grisogono partnership — namely a 60-carat heart-shaped, D near-flawless diamond pendant, whimsically hung on a delicate chain dotted with tiny ruby heart-shaped charms.

The new De Grisogono boutique — measuring 1,600 square feet of sales space spread among two floors — will cater to private clientele as well as walk-in shoppers. Designed by the London-based David Collins Studio, the store is flush in purple velvet and white crown moldings, scattered with gold and marble fixtures. The space had previously served as the Leviev boutique.

While the Kleins declined to reveal sales projections with the introduction of its new partnership, David added: “We believe our customer base is looking to invest in diamonds and jewelry, while some are looking for amazing things that are unique and rare. We do see an increase [in sales] from that consumer. It’s hard to say a percentage, we just believe there is a lot of room for growth.”