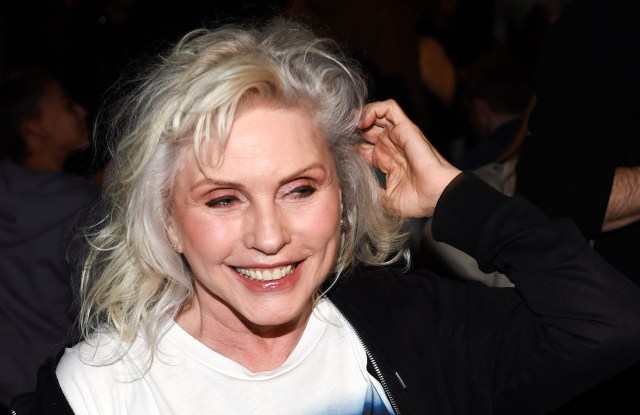 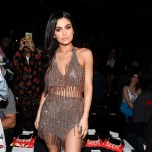 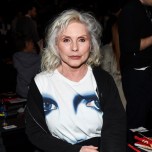 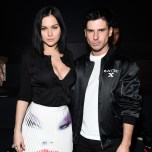 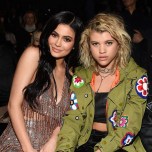 “This is the hottest venue ever,” one woman said to another. “Why are they doing this to us? Where are the fans?” the other replied.

Inside the gallery at Skylight Clarkson Square, Jeremy Scott showed his fall collection on Friday night. Who would have thought that a man wearing a turtleneck bodysuit with straps hoisting his rear end upwards would be the most appropriately dressed? Well, perhaps it wasn’t that surprising. It was a Jeremy Scott show, after all.

“I love this swimsuit,” Kathrine Herzer of “Madam Secretary” said, pointing to her top, a Scott design. “I wish that’s all I was wearing ‘cause it’s really hot right now.”

Though most in the room were hot, Debbie Harry was just bothered. She sat with her legs crossed and hands folded over her lap, occasionally answering questions, though mainly observing as reporters jammed microphones into her face and photographers competed for the best shot of her. When asked for her predictions for the show, she was curt, but responded nonetheless: “Predictions for the show? I just think it’ll be fun and a little bit crazy.”

Ashley Benson of “Pretty Little Liars” seemed to know what to expect already. “When I was in the showroom, there was, like, crazy, insane things,” she said. “It’s gonna be really fun.”

“I love how free [Scott] is with everything,” she continued. “He does the craziest things. You’d never think that it would work but it does. I’m wearing a latex skirt. I would never think I’d be wearing that, but it’s so awesome.”

Sarah Barthel of Phantogram was ready for a spectacle. “I hope Kanye West comes out and pisses on the runway or something, just loses it,” she said. West did not make an appearance, nor did he relieve himself on the runway.