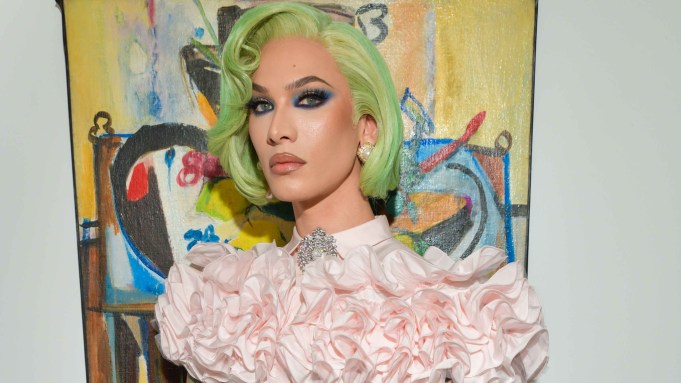 Walking through the bright halls of the Musée d’Art Moderne de Paris, one could be forgiven for forgetting it’s fall. After all, we were here to see the spring 2022 collections.

Debby Ryan, for one, said she’s not ready for Halloween to be here soon — even though she has a new vampire film premiering just ahead of the holiday.

The film costars Megan Fox, and while the two didn’t have any scenes together, Ryan didn’t want to miss out.

“I visited the same day she was shooting. They were shooting in this incredible home with like a fireplace in the pool, and there was so much lore around this home. I swung by the set that day and I think her performance is amazing. It’s really grounded and cheeky and enjoyable,” she said.

Though the film takes place in Los Angeles, much of it was shot in New Orleans, and the team had to take an eight-month break because of COVID-19. “It’s tricky when you shoot a film that takes place all in the same evening to sort of go back after eight of the longest months of everyone’s life and try to get back into character. You look different and you feel different. But then we shut down Hollywood Boulevard and it was quite dreamy,” she said. The city has a strange spookiness that she didn’t connect with at first, but feels like “there is sort of the palpable magic” to the city. She chalks it up to the contrast between its music culture and history of “voodoo and darkness and ghosts and it’s sort of supernaturally alive.”

She doesn’t have a costume yet for Halloween, but admits she kept one important item from the costume department: “I do have custom fangs.”

French actress Soko, who stars in B.J. Novak’s Hulu series “The Premise,” took time during the pandemic to focus on being a mom. “It was nice to have time to chill and just do that and to enjoy this new chapter of my life.” But she has been making the most of fashion week, hitting up the Balmain show Thursday as well. “I love dressing up and getting makeup and hair and being back in the real world,” she said.

She also stars in the upcoming film “A Good Man,” starring Noémie Merlant as a trans man who makes the decision to carry a child when his girlfriend is unable to get pregnant. Soko praised her costar and put her role in perspective. “I’m queer so it’s very much right up my alley to be in that film. To show representation as a queer woman was very important for me.”

The film premiered in Cannes earlier this year, although the release has been delayed for over a year by COVID-19. “That’s just how it is. I’m still happy that I made things that I’m proud of and that they get to come out and be seen.”