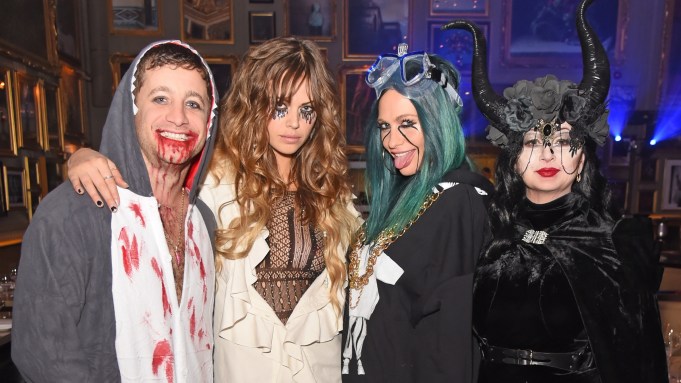 SPOOKY NIGHT: The London Edition threw a lavish deep-sea theme Halloween dinner party on Thursday in partnership with Project 0 in order to raise awareness around ocean conservation, hosted by Georgia May Jagger, Rufus Taylor and Kim Jones, who unfortunately couldn’t attend due to scheduling conflict.

Poppy Delevingne, Nick Grimshaw, Pixie Geldof, Jaime Winstone and Clara Paget attended the party at Berners Tavern, which was transformed for the night into a fictional sunken dining room of the ill-fated HMS Berners, once the most glamorous ship to sail. Grimshaw dressed as a giant blue water jellyfish, while Paget cos-played Anne Bonny, one of the most famous female pirates of all time.

Guests were greeted by a cast of fantastical creatures, mermaids, deep-sea divers and freakishly flexible disco-fishes, some with luminescent hula hoops, upon arrival with drinks made of Grey Goose Vodka. During the evening, one could purchase “pearls,” 50 pounds each, to be in with a chance to win lost treasures from the ship’s treasure chest, guarded by a mermaid and a fortune-telling lobster lady.

The event also acted as a fund-raiser for Project 0, a global movement supported by leaders in the fields of science, business, culture, fashion to awaken the fight for the ocean. A third of ticket sales went directly to Project 0.