Its walls resemble malachite, and alcoves are filled with fur. 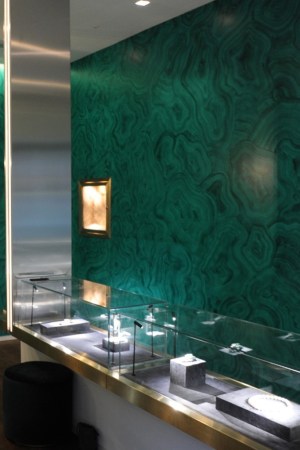 LADY CAVE: Delfina Delettrez has opened her first shop outside Italy, on London’s red-hot Mount Street, and it’s a window into her mind — and her method. The designer has filled it with trompe l’oeil malachite, Giò Ponti lights and furniture, and small fur-filled alcoves to showcase some of the jewels. She is half Fendi, after all.

“I wanted to enter into one of my pieces,” said Delettrez of her vision for the bijou space, the second store to open this week on Mount Street after Christopher Kane’s across the road.

The petite Delettrez, a vintage fur coat propped on her shoulders, pointed to the floating brass and glass display cases that line walls of the shop. “They reflect the code of the brand. I love suspended pearls and stones — and phantom settings.”

The shop, at 109 Mount Street, spans 670 square feet over two floors, and was designed by Delettrez together with Rafael de Cárdenas from Architecture at Large.

The ground floor is her showcase and everyday business space, and has low petrol-colored velvet stools tucked under the display cases, a hanging Giò Ponti light that resembles a milky semi-precious stone, and antique chairs — small and spindly, with a black-and-white diamond pattern on the cushions — that she bought second-hand in Italy.

Delettrez, the daughter of designer Silvia Venturini Fendi and jeweler Bernard Delettrez, had the walls painted to resemble malachite, and installed little alcoves in the walls, which she filled with Mongolian lamb’s fur. A single jewel twinkles from inside all the shaggy fur.

She enjoys drawing a parallel between the stuff of her dual heritage: Fur and gemstones. “They’re both primitive, powerful, heavy and bring you strength and confidence when you wear them,” said the designer, adding that she loves the way the jewelry shines against the matte surface of the fur.

The downstairs — a flexible space — will be used for private sales (the U.K. is one of her biggest markets) and for anything else Delettrez wants. “It’s my own universe down here and it’s very adaptable. I have the option to do it in velvet or make it very sterile — as long as it suits my needs,” she said.

It’s currently filled with design gems including a delicate Ponti wood and glass cabinet, two furry modernist chairs designed by Delettrez’s maternal grandmother Anna Fendi, and a swiveling coat stand and mirror by the Italian designer Joe Colombo. “I love it,” she said of the latter. “It’s beautiful, functional and it moves.”
The Mount Street opening is a milestone for Delettrez, who also happens to be in the process of moving from Rome to London for personal reasons.

She has no plans to open more stores any time soon. “My idea is not to have too many stores. The manufacturing is all done in Rome. And I need to stay in a small environment. I like to keep everything in proportion.”