The jewelry designer hosts a dinner for her twin projects. 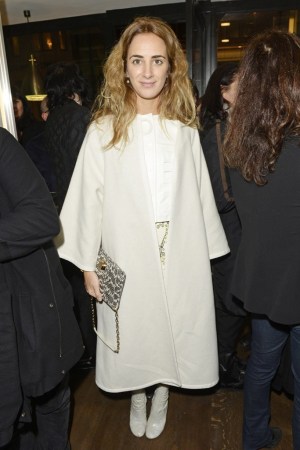 GOLD RUSH: According to Silvia Venturini Fendi, green is her designer daughter Delfina Delettrez’s favorite color and malachite her favorite stone. Which explained the malachite-printed tablecloth that covered the 66-foot table at the Marian Goodman Gallery for the dinner to celebrate the opening of Delfina Delettrez’s first London store.

The tablecloth and matching carpet were a nod to the stone’s prevalence throughout the Mount Street store. “I see Delfina in every little thing, it’s how she would do her house,” said Fendi, who had been put to work by her daughter to prepare the shop for its opening. “She grew up in our house in Italy around many pieces from Italian design and I can see the same kind of love for Fontana Arte, for Gio Ponti in the store’s transparencies and glass.”

Delettrez, sporting a new elfin hairstyle, was also celebrating the launch of the latest issue of A Magazine Curated By, which she has helmed. “I mean, I think [my mother] I confused, she doesn’t know what to be more proud of,” she said. “Something like the magazine that’s super flat or something like the shop that’s so three-dimensional. She wasn’t expecting all of that together and I wasn’t either.”

“I learned so much making the magazine. I’m ready to work on my Assouline book now,” joked Delettrez. “It’s not a jewelry-oriented magazine at all. I really wanted to focus on the gold itself and the alchemical, the mystical, the scientific, the artificial, all the aspects of gold.”