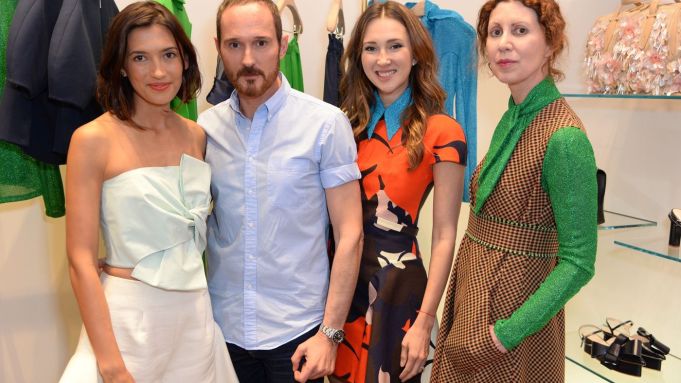 The store, located on Sloane Street in Chelsea, is flooded with natural light, and resembles the Madrid flagship, which opened in 2013. There’s an emphasis on natural materials such as wood, marble and brass.

The store spans nearly 4,300 square feet over two floors and stocks both the ready to wear and accessories collections.

Font, who hosted a dinner on Wednesday to mark the opening, said he personally oversaw the details – from concept to décor – and even selected the furniture.

“I have followed the trajectory of these designers, and they work really well in the space,” said Font during a walk-through before the dinner, where guests included Hikari Yokoyama, Valeria Napoleone, Maria Baibakova, Leith Clark and Bay Garnett.

He said it’s crucial that customers see the clothes, their colors and embroidery details in natural light. “There’s no hiding,” he said “That is what defines true luxury.”

It’s natural for Font to have an intimate relationship with his stores’ designs. He trained as an architect before moving into the fashion arena, and it was during those studies that he learned about the fundamentals of proportion and volume that inform his sculptural silhouettes.

“Structure goes beyond silhouette; the insides of the clothing have a very intricate construction, and without that inner structure of the finished garment wouldn’t work,” he said. “It’s just like a building.”

Even as a child, Font had an eye for fashion, accompanying his glamorous late mother on her shopping trips. “She was very elegant, but it seemed that she saw something in me as she would always ask my opinion, even though she was strong-minded herself and I was very young. If I said something didn’t work she would listen. She saw that I had vision.”

He said the brand chose London to open its second store because of the city’s cosmopolitan air. “The London woman loves color, and this is very in sync with what we’re doing. London is where to be right now,” he said.

Trolez called Sloane Street a shopping destination “that everybody is trying to improve upon right now, so we saw this as a great opportunity.”

He added that the next step is consolidation. “We’ve gone from scratch to the shoes and the bags and from two to four collections a year – all in the space of six years and at the end of the day you cannot run so fast.”

As for future stores, he said there are plans in the pipeline but nothing firm has been decided yet. “At some point when you start growing, you have to say ‘Let’s take it easy.’”

Trolez’s Grupo Perfumes y Diseño acquired Delpozo following the death of its founder Jesus del Pozo, having previously worked with him on fragrances.

Since acquiring the label, Trolez has downsized the runway show guest list and said he personally knows a good 40-50 percent of the guests at any show and wants to keep it that way, favoring “quality over quantity.”

Having come from a background in the fragrance industry, where it can take years to develop a new scent, the fast pace of the fashion world astounded him, he said.

However, the party favors given to dinner guests – a musky, powdery room fragrance and candle – provided a clue about one of Delpozo’s next steps: A fragrance is in the pipeline. It’s already been in development for two years, he said, but there are still at least two years to go. Although he declined to talk about the notes, he said the juice would be a first, as it is being developed by three noses.

The all-embracing Delpozo concept extended also to the dinner, which took place on the store’s lower ground floor.

Font masterminded everything from the table setting, with its delicate roses of the palest pink mirroring the intricate floral embroideries in his collections, to the place cards, which featured hand-drawn renderings of looks from the spring/summer 2016 collection.

Looking ahead, said Font, there will be an “oriental theme” for spring/summer 2017, inspired by an art show he saw in New York.