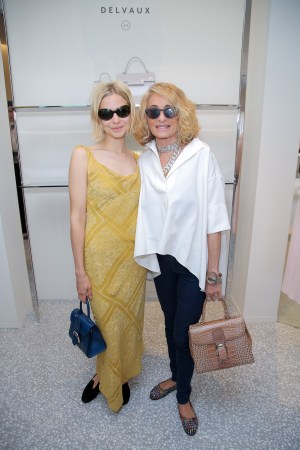 Belgian luxury leather goods house Delvaux had a literal friends and family event on Tuesday, throwing a West Coast lunch at Freds atop Barneys New York Beverly Hills hosted by Ann Dexter-Jones and her daughter Annabelle. Though the women are New Yorkers, they chose to host in Los Angeles (the New York lunch last Thursday was hosted by Carmen Dell’Orefice and Zani Gugelmann), perhaps because Dexter-Jones’ offspring, Alexander Dexter-Jones, and Mark and Samantha Ronson are based there. All three made it to the event (Samantha stopping by at the end after her radio show).

“Look, I’m as superficial as anyone; I love a party, and it’s better if you can have your family there, too,” declared Ann Dexter-Jones, who commandeered a staffer’s iPad to make sure all family members were equally dispersed among the other guests. She actually discovered the brand through her daughter Annabelle, who bought her first Delvaux bag four years ago. “I don’t like things with logos on them, and they were classic, which fits my sensibility,” said Annabelle.

Her good taste extended to her clothes; she ended up buying a Margiela dress off the rack and throwing it on because the clothes she was wearing were too sheer and she couldn’t find the right slip to go underneath. “You know I don’t really care about that stuff, but this is a nice lunch. So, I just had to end up buying like a fancy dress,” she laughed.

The fledging actress, who spends much of her time in L.A., revealed that she just directed, produced and starred in her first short film. “I’m still in the thick of editing it right now, so we’ll see how it ends up before we decide where to show it,” she said.

Elsewhere, her brother Alexander showed up with his bandmate Alexandra Parker. The duo, whose group is called WKLB, which stands for We’re the Kids of the Light Brigade, is working on their first EP. “Each of my kids has to develop their own style,” noted the jewelry designer matriarch, when people asked her why her musically inclined offspring don’t all work together.

If the lunch seemed to skew old guard and very young, it was intentional. “Our new customers are actually young. Millennials like the idea of hooking into something with history,” noted creative director Christina Zeller. Indeed, the Alex’s band is named for Alfred Lord Tennyson’s poem “The Charge of the Light Brigade.”