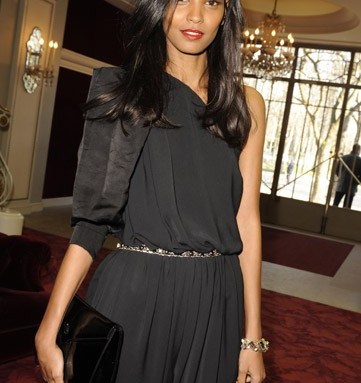 PARIS — Waris Dirie and her screen alter-ego Liya Kebede joined forces at a charity screening of “Desert Flower,” the film adaptation of Dirie’s autobiography, hosted by PPR chief François-Henri Pinault’s Foundation for the Dignity and the Rights of Women.

The movie charts Dirie’s journey from goat herder in Somalia to international model and campaigner against female genital mutilation. Director Sherry Horman said she had no idea that Kebede was also a model when she picked her for the lead. “We were casting in three continents. At the very end, I’d already looked at at least 1,200 people and we ended up with her – she was very convincing,” she said.

Dirie, who sits on the board of PPR, twirled among guests in a floor-length lilac Yves Saint Laurent gown. “I’m happy with the movie,” she said. “Liya is fantastic.”

Attendees included designer Philippe Starck, who revealed that he would be opening outposts of his Paris hotel Mama Shelter in five new cities: Bordeaux, Lyon, Marseille, Istanbul and New York. “It is so wildly successful that everyone is rushing to offer us locations,” he said.