Sally Singer and Pilar Viladas of T Magazine hosted a party in Milan to mark the latest spring Design issue and kick off Salone del Mobile. 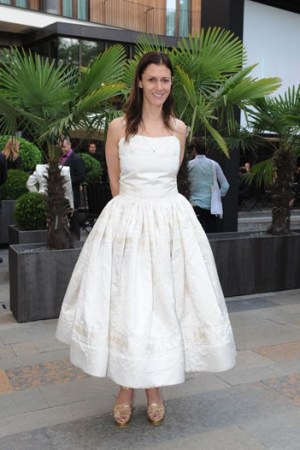 DESIGN TO A T: Sally Singer and Pilar Viladas of T Magazine hosted a party Monday evening in Milan at the Bulgari Hotel to mark the latest spring Design issue and kick off Salone del Mobile. Singer, in a cream-colored strapless ballerina dress by designer Marco Zanini for Rochas, said this was her first time attending Design Week, but the crossover aspect with fashion has made the experience “not too alienating.” Christian Lacroix, who is launching a home collection with Italian mosaic maven Sicis, said that this was his first time attending Salone del Mobile. “I love the dynamism here,” he said, referring to the eclectic gathering in Milan. “These people from the galleries and furniture world have that, how do you say — zip!” he added with a flourish.

STILL HANDS ON: “Tod’s is now a plane with two pilots,” Diego Della Valle, chairman and chief executive officer of the Italian luxury goods house, told WWD on Tuesday. “The company is growing and we are consolidating its structure,” said Della Valle, in response to a story published in Spain’s El Pais magazine on Sunday, which triggered several reports on the Internet and Italian dailies implying that Della Valle was looking at passing the baton to his brother Andrea Della Valle, vice chairman of the firm. “[Andrea] is managing the company very well, and he is taking a step forward, but this does not mean I’m taking one backward. I’m alive and kicking and have no intention of going anywhere,” said Della Valle. Asked if he was planning to focus on his other many ventures and interests outside Tod’s, he said: “This is my real job. Those other engagements are very visible, but don’t take up much of my time.”

STAYING PUT: Giorgio Armani will not be traveling to Beijing after all and has decided to cancel the event planned there later this spring. “It’s not the right moment to celebrate, hold events or parties. It’s such a difficult time now,” said the designer during the presentation of his home collection in Milan on Tuesday, referring to the earthquake and its tragic consequences in Japan last month. Armani implied he will donate funds that would have been dedicated to the event to help support the Japanese people.

KATE’S BRIDAL LEGS: The bridal gown is still top secret, but the soon-to-be princess Kate Middleton will be wearing glamorous and sexy bridal legwear by Aristoc, according to a spokesman for parent company Courtaulds, maker of Pretty Polly, Britain’s number-one legwear brand. “The Aristoc brand is manufactured in Derbyshire and is known for product innovation, beautiful manufacturing with back seams, great yarns and special expertise with shaping…there are very fine sheers and a glamorous bridal range as well,” said the spokesman. Aristoc’s bridal collection includes 10-denier sheer bridal stockings that have an elegant sheen, sandal toes and a deep, floral lace top, an exclusive design.

GIBERSON’S NEW HOME: On May 5, Tess Giberson will officially unveil her freestanding store at 97 Crosby Street in Manhattan. The 600-square-foot space will include an installation by artist Carol Bove, who happens to have been the brains behind the designer’s metal mesh backdrop to her spring 2011 presentation. But Bove won’t be the only artist there. The space, which will also sell CDs and art books, is to include an installation by painter Jon Widman, aka Mr. Tess Giberson.