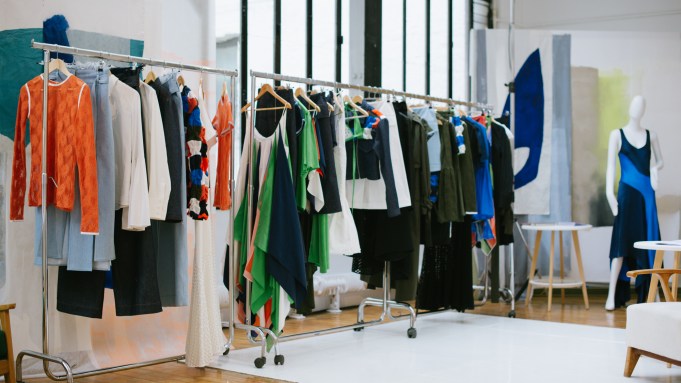 TALENT SHOW: The Fédération de la Haute Couture et de la Mode’s Designers Apartment initiative was once again a showcase for young creative talent this season, with Coralie Marabelle, Mazarine and Victoria/Tomas cited by buyers as among the highlights at the showroom, which ended its seven-day run on Tuesday.

Marabelle staged her first runway presentation within the Atelier Richelieu space on Sept. 28, and is receiving an increasing amount of attention from buyers since winning the inaugural L’Oréal Paris Fashion Grant earlier this year. “Major stores are beginning to take an interest,” said Marabelle. Her spring collection was a patchwork of bright colors and denim inspired by a competition organized by Levi’s in the Seventies that invited people to present their own customized creations. Highlights included a textured patchwork maxidress as well as denim items.

Marie Marquet, the designer behind quirky label MiniMe Paris, complained she is finding that retailers are less focused on creativity than in the past. “I think buyers, with thankfully some notable exceptions, are too focused on business and not enough on the brand story at the moment, and that’s a shame,” she continued. “I don’t want to enter into the system that just focuses on merchandise.”

Nevertheless, her “Warrior of Love” collection was more pared back than in the past. “I wanted to evolve beyond the “Disney-like” tag I have and highlight the products and the craftsmanship,” she explained. High points included a denim coat with a bright tweed message back and fringed cotton sleeves.

Newcomers this season included Savoar Fer, presenting its first commercial collection, and DA/DA Diane Ducasse. Savoar Fer’s designs, which focus on a different production technique each season, centered on cross stitch, sewing strands of denim onto a mesh base or strips of tulle onto a denim jacket. “People say we are losing artisanal techniques, but it is not the techniques that are problematic, it is the products,” said designer Eliane Heutschi, who was pleased with her collection’s reception at the showcase. Wholesale prices for her designs range from 110 to 690 euros.

Da/Da Diane Ducasse presented its fourth collection, with classic pieces built around Italian men’s wear fabrics and embroideries suggestive of cowboy and Dadaist motifs. “We have seen better buyers than at the trade shows where we have presented in the past,” said a spokeswoman for the brand, which has its own retail outpost in Paris. Retail prices for the line range from 195 euros for a shirt, to 895 euros for a coat.

Afterhomework was another highlight. The brand, created by two teenage designers and showing for the second time, garnered attention from buyers from Opening Ceremony and 10 Corso Como, co-founder Pierre Kaczmarek said. The brand also recently partnered with Converse for a line of sneakers. Its collection included a capsule built from recycled fabrics, including a dress made up of 80 silk ties from Italy, as well as nylon creations inspired by Lamborghini’s color catalog.